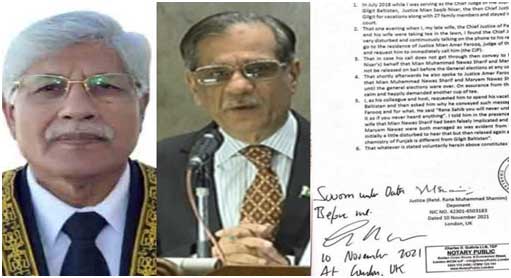 Pakistan Judiciary has passed through many ups and downs. Chief Justice Muneer did not agree with restoration of parliament that was earlier dissolved. Later, on some occasions it gave full protection to Martial Laws taking charge of the government by the Military.

Former chief judge of the apex court of GilgitBaltistanRana M Shamim has stated in a notarized affidavit that he was a witness to the then CJP SaqibNisar’s direction to a high court judge not to release Nawaz Sharif and Maryam Nawaz on bail at any cost before the 2018 general elections.

When approached, RanaShamim initially confirmed the content of the affidavit read to him on a What Sapp call by this correspondent. Former Chief Justice SaqibNisar when approached categorically denied that he had ever directed any of his subordinate judges in connection with any judicial order whether it pertained to Nawaz Sharif, Shehbaz Sharif, Maryam Nawaz or anyone else.

The following is the content of Shamim’s statement on oath:

The Islamabad High Court (IHC) on 16th November issued show-cause notices to senior journalist AnsarAbbasi, former chief judge of Gilgit-BaltistanRana Mohammad Shamim Ahmed Khan and two others over an investigative report published in The News that highlighted an accusation against former chief justice of Pakistan MianSaqibNisar of colluding to deny bails to top PML-N leadership before general elections 2018.

The story in question was titled “Ex-CJ GB claims in signed affidavit: ‘SaqibNisar directed not to release Nawaz, Maryam before 2018 elections'”.

On July 6, 2018, an accountability court had sentenced Nawaz, Maryam and son-in-law Mohammad Safdar to 10 years, seven years and 1 year imprisonment, respectively, after finding them guilty in the Avenfield properties reference. They were later arrested upon their arrival in Lahore from London on July 13.

The verdict had come days before the 2018 general elections held on July 25, later that month. Subsequently, all three had appealed the verdict, with the IHC suspending their sentences and ordering their release on September 19, 2018 until the final judgment.

When Abbasi requested for permission to speak in court, the IHC CJ replied “you have already caused enough damage”.

“I was the one who gave the story, you can take action against me,” the senior journalist said, adding that he had done so in an effort to protect the sanctity of the court.

Speaking alongside other PML-N leader, ShahidKhaqanAbbasi also demanded that a suomotu notice be taken of the matter and questioned: “If Mian Nawaz Sharif can go to jail, why can’t MianSaqibNisar?”

“If RanaShamim is lying, he should be given stringent punishment, but if he is speaking the truth, then JusticeSaqibNisar’s place is in jail,” Abbasi remarked at the press conference.

However, the government dismissed the opposition’s claims and Information minister FawadChaudhry said that instead of “fabricating silly stories and conspiracy theories”, Nawaz should tell the people about the source of the money used to purchase the Avenfield Apartments.Judiciary is of the view that social media has dramatically impacted human lives and societies across the planet. Rule of law and administration of justice are intertwined and
depend on each other. But they do not operate in a vacuum. Rule of law can
only be ensured if the administration of justice is effective, impartial and confidence inspiring.

Is the essence of the independence of the judiciary and its relevance with social media?

A judge, whether conducting a trial or hearing an appeal, is expected to be fair, impartial, incorruptible, competent and fearless. It is the duty and function of a judge to decide disputes, safeguard life and liberty and enforce other rights regardless of race, color, religious or political beliefs. A judge must have the ability to perform functions without being influenced in any manner.  A judge, therefore, solemnly commits himself to  do right to all manner of people, according to law, without fear or favor,  affection or ill will and to preserve, defend and protect the Constitution. How does a social medium influence an independent judge or the independence of the judiciary as an institution?

“Social Media” refers to the internet based applications, which allows users to instantly create, organize and distribute messages, voice recordings, pictures and videos. The social media platforms such as Twitter, Facebook, YouTube and many others have the ability to spread comments, views and videos globally.

“The abuse of social media platforms in a politically polarized society entails the risk of harming institutions and individuals. Fake, false, malicious and misguided propaganda, cyber bullying or cyber stalking, targeting the judiciary and its members on social media platforms has become a common phenomenon. The privacy of judges is not protected and messages, photos and videos relating to their personal lives or family matters are also uploaded in flagrant violation of the right to privacy. Fake, false and fabricated information and propaganda about judges and the administration of justice is resorted to in order to get desired verdicts. Motives are imputed when a verdict is not of liking. It definitely creates an intense challenge for an independent judge and the judiciary. But the dignity of a Judge or a Court is not dependent on resorting to the law of contempt. The judgments of a Judge and the latter’s conduct is the measure of his or her integrity and independence. If contempt proceedings were to be initiated on the basis of a message uploaded on one of the social media platforms then it would open flood gates of petitions because of the number of allegedly contemptuous content- ———. The integrity and independence of the Hon’ble Judges, regarding whom the alleged tweet has been attributed, is beyond doubt. The dignity of an independent judge nor his or her integrity is so frail and vulnerable so as to be harmed by a tweet on the social mediaplatform.”

One hopes that Islamabad High court would thrash out the facts and issue orders accordingly.