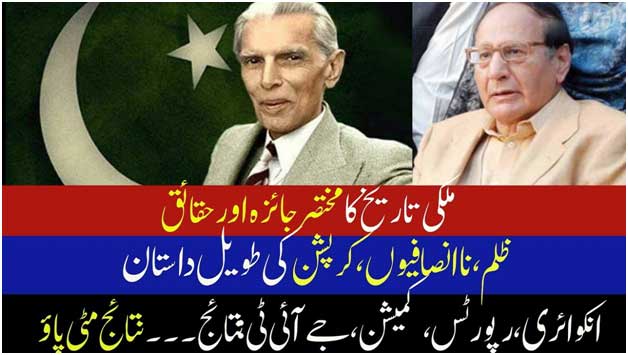 Since Pakistan many reports have been complied on various mishappenings like dismemberment of Pakistan as Hamoodur Commission report, Memo Scandal, Abbot bad Commission report on killing of Osama, Uzair Bloch Report, Baldia incident report and Moriani report on KPT. Now a campaign has been lodged on these reports by the government and opposition with their own versions. But actual reports are actual and contain horrified decisions.

Dismemberment of Pakistan was the incident in which hundreds of our brave forces lost their lives due to fault of some of their officers. Now Hamoodur Rehman Commission report is part of history. History provides us opportunity to expose those who damaged their institutions. A view may exist that exposing such officer’s mean exposing full force but this is not correct. Exposing those officers mean strengthening your forces, by making others not to make such mistakes at their end.

Hamoodur Rehman commission was appointed by the President of Pakistan in December, 1971 to inquire into and find out “the circumstances in which the Commander, Eastern command, surrendered and the members of the Armed Forces of Pakistan under his command laid down their arms and a ceasefire was ordered along the borders of West Pakistan and India and along the ceasefire line in the State of Jammu and Kashmir.

First, commission concluded that General Yahya Khan, General Abdul Hamid Khan, Lt. Gen. S.G.M.M. Pirzada, Lt. Gen. Gul Hasan, Maj. Gen. Umar and Maj Gen Mitha should be publicly tried for being party to a criminal conspiracy to illegally usurp power from F.M. Mohammad Ayub Khan in power if necessary by the use of force. In furtherance of their common purpose they did actually try to influence political parties by threats, inducements and even bribes to support their designs both for bringing about a particular kind of result during the elections of 1970, and later persuading some of the political parties and the elected members of the National Assembly to refuse to attend the session of the National Assembly scheduled to be held at Dacca on the 3rd of March, 1971. They were furthermore, in agreement with each other about bringing about a situation in East Pakistan which led to a civil disobedience movement, armed revolt by the Awami League and subsequently to the surrender of our troops in East Pakistan and the dismemberment of Pakistan:

In regard to Lt. Gen. Niazi the GOC of East Pakistan, commission said that he was making money in the handling of Martial Law cases while posted as G.O.C Sialkot and later as G.O.C and Martial Law Administrator at Lahore; that he was on intimate terms with one Mrs. Saeeda Bukhari of Gulberg, Lahore, who was running a brothel under the name of Senorita Home, Further it also came on the record, the ill repute of General Niazi in sex matters, and his indulgence in the smuggling of Pan. From the mass of evidence coming before the Commission from witnesses, both civil and military, there is little doubt that Gen. Niazi unfortunately came to acquire a bad reputation in sex matters, and this reputation has been consistent during his postings in Sialkot, Lahore and East Pakistan. It is necessary that this painful chapter of the events in East Pakistan be looked at in its proper perspective. Let it not be forgotten that the initiative in resorting to violence and cruelty was taken by the militants of the Awami League, during the month of March, 1971, following General Yahya Khan’s announcement of the Ist of March regarding the postponement of the session of the National Assembly scheduled for the 3rd of March 1971.

In the evidence specific allegations were made before the Commission that Lt. Col. Yakub Malik, CO of 53 Field Regiment was responsible for the killing of 17 Officers and 915 other ranks at Comilla Cantt., while disarming 4 EBR, 40 Field Ambulance and Bengali SSG personnel. The falsity of Sheikh Mujibur Rahman’s repeated allegation that Pakistani troops had raped 200,000 Bengali girls in 1971.

Lt. Gen. Irshad Ahmad Khan, former Commander 1 Corps, be tried for criminal and willful neglect of duty in conducting the operations of his Corps in such a manner that nearly 500 villages of the Shakargarh tehsil of Sialkot district in West Pakistan were surrendered to the enemy without a light. Maj Gen Abid Zahid, former GOC 15 Div, be tried for willful neglect of duty and shameful surrender of a large area comprising nearly 98 villages in the phuklian salient in the Sialkot district of West Pakistan, which surrender also posed a standing threat to the safety of Marala Headwork’s by bringing the Indian forces within nearly 1500 yards thereof. He also kept the GHQ in the dark about Indian occupation of the Phuklian salient until the loss was discovered after the war.

Maj. Gen B.M. Mustafa, former GOC 18 Division, be tried for willful neglect of duty in that his offensive plan aimed at the capture of the Indian position of Ramgarh in the Rajasthan area (Western Front) was militarily unsound and haphazardly planned, and its execution resulted in severe loss of vehicles and equipment in the desert.

Forward going commission had asked the Government for calling upon all Officers of the Armed Forces to submit declarations of their assets, moral values should not be allowed to be compromised by infamous behavior particularly at higher levels moral rectitude is given due weight along with professional qualities in the matter of promotion to higher ranks; (c) That syllabi of academic studies at the military academics and other Service Institutions should include courses designed to inculcate in the young minds respect for religious democratic and political institutions (d) That use of alcoholic drinks should be banned in military messes and functions (e) That serious notice should be taken of notorious sexual behavior and other corrupt practices

Now this incident has passed 50 years and our Armed forces have reformed itself to some extent by getting away from Taliban and all religious and linguistic divide through Zarbe Azb. Hence these developments are good omens for our future.

Now coming to Uzair Balch Report, in spite of working for PPP he has worked for all political parties including PPP leadership, Fahmida Mirza and her husband Zulfiqar Mirza now in PTI. He has been involved in 198 killings, involved in 8 SHO nominations, worked as a spy for Iran through his fake passport by supplying information of Pakistan military to them. He is Involved in getting Rs 50 million as Bhhata. He is now in custody and needs to be tried. But on 12th July 2020 he has denied from all these charges in the court of law. This is very astonishing.

Now coming to Baldia report, Rehman Bhola and Hammad Siddiqui of MQM Burnt Baldia factory for not getting Rs 200 million from the factory owner to send it to Altaf Hussain in London. 250 laborers were burnt with 50 as injured. Still the case is under proceedings.

With these historical facts we all should now strive to save Pakistan through our collective efforts.