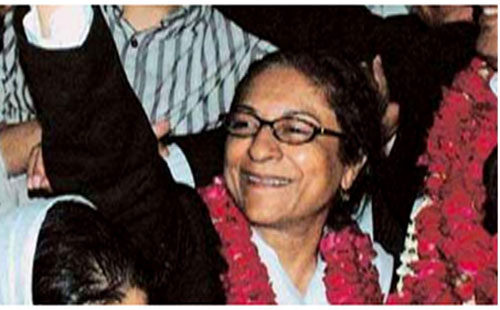 On Nov 20-21 at Lahore it was held to commemorate struggle of Asma Jahangir a known lawyer. The theme this year was Challenges to Human Dignity.

But nobody paid any attention to this theme.Differentpersons from all sides and judiciary participated in the conference.

However from government side Minister for Information and Broadcasting Chaudhry FawadHussain said that conclusion of a conference, attended by top judges, with speech of a fugitive (Nawaz Sharif) was nothing but an insult to the judiciary. Referring to Nawaz Sharif’s address to the Asma Jahangir Conference, the minister said in his tweet that he had advised the Supreme Court Bar Association to remain neutral that provides them chance to play a positive role.

FawadHussain said he was also invited but he declined to attend as he had come to know that conclusion of the conference was to be done by speech of a fugitive which was tantamount insult to the judges and judiciary.

The conference was marked with the first day of, with Chief Justice of Pakistan Gulzar Ahmed delivereda fiery speech during the event.

The top judge appeared to lose his patience at sustained allegations of partiality against the judiciary, stressing that his court has never accepted pressure from anyone, nor will it ever do so.

Responding to a speech by veteran lawyer Ali Ahmed Kurd, in which Kurd had accused the courts of not working independently, the top judge lashed back: “I have never [taken dictation from] any institution and have never been under pressure from anyone.”

No one has ever told me what judgment I need to hand down and no one has dared to dictate me on my orders,” the country’s top judge said.

“No matter how many cases have come before me, I have never made a decision at the behest of anyone,” he said. “No one has interfered in my work — I have made my decisions according to my understanding and as per the Constitution and law.”

Seemingly making an indirect reference to the recent controversy involving former chief justice Saqib Nisar and ex-chief judge of Gilgit-Baltistan Rana Shamim, CJP Gulzar Ahmed said, “I have not taken anyone’s dictation till today and my fellow judges follow the same conduct. No one can say that I have taken dictation.”

The visibly angry judge insisted that the courts have been working according to the law and that Supreme Court judges have been striving to serve justice to the people.

“When decisions are handed down, some people say they are right and some say they are wrong. These are the people’s opinions and they have the right to hold them. Everyone has their own opinion and perspective, and it must be respected.”

“This is the beauty of the judiciary and democracy and we will follow it,” he said. “Nobody can dare to stop us.”

However, differences of opinion do not allow any party to accuse the courts of being under pressure, the apex court judge underlined.

The organizers of the Asma Jahangir Conference condemned the alleged “muzzling” of PML-N supremo Nawaz Sharif’s speech, after internet services at the venue were reportedly suspended soon after his address began.

Nawaz began his speech — relayed from London via video link during the closing ceremony of the keenly watched conference held in Lahore — by paying tribute to the late celebrated lawyer and human rights activist Asma Jahangir, but the live stream abruptly stopped shortly after Munizae Jahangir, Asma’s daughter and one of the organizers, confirmed that broadband internet services and mobile internet were suspended soon after Nawaz began speaking.

“The organizers of Asma Jahangir Conference 2021, which include the Supreme Court Bar Association, Pakistan Bar Council, and the AGHS, strongly condemned this act and consider it an onslaught on the freedom of expression.”

In his wide-ranging speech, Nawaz called for immediately devising a national agenda to pull Pakistan out of its current crises and take it on the path of democracy, reiterating the need to “put our house in order”.

The former prime minister once again hit out at the military establishment and criticized interference in judicial and government affairs that he claimed had led to Pakistan’s “downfall”.

He said the current era that Pakistan was going through was a “turning point” in its history.

“The most dangerous aspect is the deepening disappointment and severe helplessness [among the people],” he said. “History is witness that when nations descend into the quagmire of despair, questions start to be raised about that nation’s survival.”

He said the 220 million people of Pakistan were demanding answers to some fundamental questions and until they received those, the country’s state of affairs would not improve.

The PML-N leader said Pakistan’s political history was full of examples that showed that “the Constitution is broken here, laws are broken here, courts are broken here, judgments are obtained through favorite judges, dictators get legitimacy here, a state within a state is run here, political engineering factories are set up here, and […] votes are stolen here.”

The suppression, he alleged, was not limited to politicians or media, but even judges “speaking the truth” had to forgo their jobs.

He continued: “I think we need to join hands and agree on one national narrative: adherence to the Constitution and performing duties in its light while staying within our limits; this is the solution to our problems.”

The former premier said regional and international circumstances had accentuated Pakistan’s need to “correct ourselves”.

Earlier, former Prime MinisterShahidKhaqanAbbasi while addressing the conference lashed out at the National Accountability Bureau (NAB) and branded it a “tool to convert people into turncoats”.

“If members of parliament walk out to [sit in] a vehicle that costs Rs30-60 million, go to their Rs500m home [with a] monthly electricity bill of 0.2m. And they pay no taxes, what does that tell you?

“That’s a corrupt politician. Why don’t we go after them? Let us start with the president of Pakistan. Let the prime minister be next, followed by the leader of the opposition.

“Ask them this basic question: how do you justify your lifestyle?”

Abbasi said that tax laws should be used to disqualify politicians, or use Articles 62 and 63 of the Constitution against them.

Recounting the process of legislating on the issue of appointing judges, he said that he had moved an amendment which stated that anyone wishing to become a judge should present his tax history for the last 10 years.

“You’d be surprised at how many people who have not paid taxes became judges.” He added that those judges who were unable to do so were either not technically qualified to be judges or had hidden their income.

One may differ but Asma Jehangir conference succeeded in getting the actual picture of the country before ever one that need reconciliation on extending justice to every person either free or behind bars have the right to express their views and get justice. Now organizers of Conference has confirmed this version through a press statement.