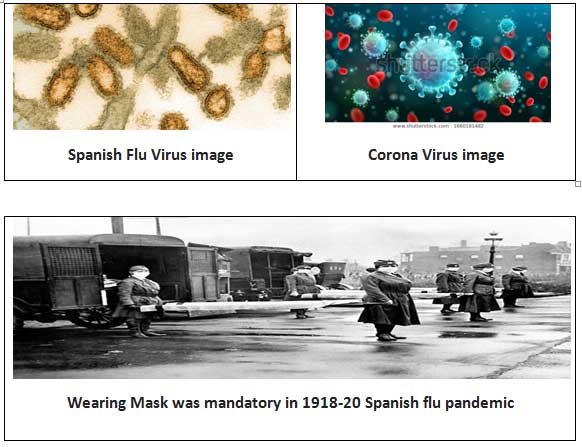 It looks strange but it has happened just after exact 100 years that an epidemic has appeared in form of corona virus like Spanish Flu that was considered the deadliest in history that infected an estimated 500 million people worldwide in 1918—about one-third of the planet’s population—and killed an estimated 20 million to 50 million victims, including some 675,000 Americans. While the Spanish flu pandemic of the early 20th century originated from Europe and killed at least 50 million globally, India of that time paid the heaviest price.

Despite the fact that the 1918 flu wasn’t isolated to one place, it became known around the world as the Spanish flu, as Spain was hit hard by the disease and was not subject to the wartime news blackouts that affected other European countries. (Even Spain’s king, Alfonso XIII, reportedly contracted the flu.)

Now the same thing is happening in case of Covid-19 that has started from China and spreaded to all over the world .It would also test the overstretched health system of the developing countries like Pakistan.

Like Corona Virus that has been mainly brought through travelling, the Spanish virus was also brought on ships by infected people. It spreaded like wildfire as ill-prepared doctors in the then-British colony struggled to contain it. The influenza spread from the ports of Bombay into the crowded city streets in a matter of days after first appearing in May, 1918. From there, sick people carried it via trains to rural towns and villages. In the end, an estimated 18 million were dead, leaving India to account for one-fifth of Spanish flu deaths.

Now the outbreak of the Covid-19 pandemic has resurfaced fears that countries like Pakistan are ill-prepared to handle the crisis when even developed nations like Italy USA UK France Spain are struggling to halt mounting casualties.

In case of Spanish flue the sick, used to experience typical flu symptoms as chills, fever and fatigue, and they do usually recover after several days, and the number of reported deaths were low.

However, a second, highly contagious wave of influenza appeared with a vengeance in the fall of that same year in case of Spanish flu. Victims died within hours or days of developing symptoms, their skin turning blue and their lungs filling with fluid that caused them to suffocate. In just one year, 1918, the average life expectancy in America plummeted by a dozen years.

Experiencing from Spanish flu the symptoms and recovery in Corona Virus are almost the same but it is also the time to stop happening of its second wave as when happened in case of Spanish flu it was more dangerous.

While Pakistan has taken a number of steps to curb its spread, there are concerns that tests have been carried out on just a fraction of the potential virus carriers.

In Pakistan only 0.4-0.8 is its health expenditure as % of GDP. The spending on health has been less than one percent of GDP for decades. Due to less public sector hospitals the private sector provides health coverage to 70% of the population, whereas the public sector provides health services to the remaining 30% of the population of the Pakistan. By the year 2018-19, the number of public sector hospitals has increased to 1,279, Basic Health Units (BHUs) improved to 5,527, Rural Health Centers (RHCs) were increased to 686 and dispensaries to 5,671. These facilities together with 220,829 registered doctors, 22,595 registered dentists, and 108,474 registered nurses bring the current ratio of one doctor for 963 persons, 9,413 persons per dentist and availability of one hospital bed for 1,608.

Densely populated cities, pollution, poor sanitation, and millions of people who live in slums make it a breeding ground for diseases such as tuberculosis, Infections, heart diseases, diabetes, or cancers that are the leading cause of death in Pakistan now added with Corona Virus this time.

Pakistan, doctors are already warning that hospitals in the country of more than 200 million people aren’t equipped to deal with a pandemic.  So far, there have been 40 reported deaths and around 2798 confirmed cases of Covid-19. And there are concerns that these numbers can spike.  “We are not prepared. Our hospitals are not prepared to handle normal diseases so you can imagine what can happen with this,” says one doctor.

Most of the corona virus cases in Pakistan have been linked to Muslim pilgrims returning from Iran, where more than 3295 people have died.

The government faces criticism for not being able to stop infected people from escaping isolation facilities.  Nevertheless, the provincial Sind government has enforced strict measures, deploying police and soldiers to keep markets shut and people inside their homes.

A big worry is that there’s no mechanism in place to track people who might have come into contact with an infected person, says a doctor.

The government has set up testing facilities at its hospitals but they are not enough to check the potential carriers of the corona virus.

In the whole of Punjab (Pakistan’s largest province) they have the capacity to test 1000 to 1,200 people a day and that too in private labs and they are charging 8,000 rupees ($50) for one test. In other provinces position is even worst.

Hence apart from government and every fraction of opposition just depending on labeling others by using filthy language the time is to unite at least to provide ventilators, equipments and testing equipments to the hospitals from internal or external sources. Further at this time only Doctors, Para medical staff needs 100% support of all without mixing them with police or other institutions. They are at the front and need full appreciation and support of all.

We just keep in mind the havoc of Spanish flu that was mishandled and took millions of lives. This time with new technology we can block corona virus attack if we worked with unity and sincerity. 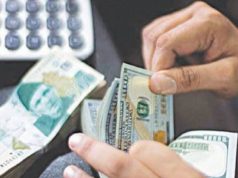