As of 12th April latest on corona Virus

· Putting the new corona virus firmly in the picture

There are many confounding aspects of Sars-CoV-2 (its medical term), the virus that causes Covid-19. One is that we can’t see it with the naked eye. Avoiding something that you can’t see brings its own challenges, but Eoin Winston wants to help us picture the virus and get a better visual understanding of what we are dealing with. This can be of great assistance to researchers in developing a vaccine and antiviral treatment.

Boris Johnson in ICU, Raab deputized to step in as needed

UK Prime Minister Boris Johnson has deputized Foreign Secretary Dominic Raab to step in as leader as necessary after Johnson was moved to an intensive care unit after contracting the Covid-19 corona virus. Now he is out of ICU.

“Together we are tackling this disease, and I want to reassure you that if we remain united and resolute, then we will overcome it,” the Queen said. “I hope in the years to come everyone will be able to take pride in how they responded to this challenge.”

·During a Palm Sunday mass held on 5th April in a deserted church, Pope Francis told young people not to be afraid to put their lives on the line for others during the corona virus pandemic.

Taiwan rapidly produced and implemented a list of at least 124 action items in the past five weeks to protect public health,” report co-author Jason Wang, a Taiwanese doctor and associate professor of pediatrics at Stanford Medicine, said in a statement. “The policies and actions go beyond border control because they recognized that that wasn’t enough.” In addition, Taiwanese officials also moved to ramp up domestic face-mask production to ensure the local supply, rolled out island wide testing for corona virus — including retesting people who had previously unexplained pneumonia — and announced new punishments for spreading disinformation about the virus.

On March 14, Zahara cut itself off from the outside world as a dangerous corona virus spread its tentacles across Spain. The mayor, 40-year-old Santiago Galván, decided to block all but one of the town’s five entrances. Galván acted the day that Spain’s “state of alarm” came into force. Since then, the country has recorded more than 150,000 cases and 16,000 deaths, according to Johns Hopkins University figures.

“There were some awkward moments,” Barria said. Like when the gate agent announced a formal boarding process only to remember that Barria was the sole passenger who would board, or when the pilot approached his seat to personally explain a delay in take-off due to a mechanical issue, rather than speak over the PA system.

·  A beauty queen who was crowned Miss England in 2019 has returned to the United Kingdom from overseas charity work to continue her career as a doctor amid the corona virus pandemic. Along with this Irish leader Leo Varadkar picks up shifts as medical doctor to help tackle the pandemic

Bhasha Mukherjee took a career break as a junior doctor after competing in the Miss World pageant in December 2019. Mukherjee represented England at the pageant after winning Miss England. Now she is back as a doctor. Seven years ago, quitted medicine for politics. Now he is going back to work as a doctor as his country battles the novel corona virus outbreak. The Taoiseach, as the Prime Minister is referred to in Ireland, has rejoined the medical register and will work one shift a week to help out during the pandemic, national broadcaster RTE reported. Varadkar worked as a doctor for seven years before becoming a politician. He left the medical profession in 2013.

·  The decades-old drug that President Donald Trump has persistently promoted as a potential weapon against Covid-19 has within a matter of weeks become a standard of care in areas of the United States hit hard by the pandemic — though doctors prescribing it have no idea whether it works.

Doctors and pharmacists from more than half-a-dozen large healthcare systems in New York, Louisiana, Massachusetts, Ohio, Washington and California told Reuters they are routinely using hydroxychloroquine on patients hospitalized with Covid-19. At the same time, several said they have seen no evidence that the drug, used for years to treat malaria and autoimmune disorders, has any effect on the virus. Use of hydroxychloroquine has soared as the United States has quickly become the epicenter of the pandemic.

·China took new measures on 8th April to try to prevent asymptomatic “silent carriers” of the new corona virus from causing a second wave of infections, as the country reported another modest rise in confirmed cases.

Mainland China reported 63 new infections on 8th April, up from 62 a day earlier, the National Health Commission said. Of those, 61 were travelers arriving from overseas, bringing the total number of confirmed cases in China to 81,865. While new infections have fallen from their peak in February after China locked down several cities and imposed strict travel restrictions, authorities have called for continued vigilance amid fears of a fresh resurgence of infections. Aside from curbing an influx of infected travelers from abroad, China’s other concern is managing asymptomatic people, or virus carriers who exhibit no clinical symptoms such as a fever or a cough. Liu Youning, a professor of respiratory medicine at the People’s Liberation Army General Hospital has said asymptomatic carriers posed little risk, but that people should continue to avoid crowded areas, maintain social distancing, wear masks and wash hands.

More than 45 million people were lifted out of poverty between 2002 and 2018 as the country developed industries that span textiles, agriculture, furniture, plastics, paper, tourism and telecommunications. Vietnam is now undergoing another transformation — thanks to technology.

Biden likely won’t secure the number of delegates needed to clinch the nomination until June. But without any Democratic rivals left, a general election campaign that will almost certainly be the most expensive and among the nastiest in US history is underway.

·NASA astronaut, Russian cosmonauts launch to the space station during a pandemic

Two Russian cosmonauts, Anatoli Ivanishin and Ivan Vagner, and NASA astronaut Chris Cassidy launched to the International Space Station from the Baikonur Cosmodrome in Kazakhstan on 9th April morning at 4:05 a.m. ET. The planned launch comes at a time when many events have been postponed or canceled due to the corona virus pandemic. Travel restrictions prevented some of the astronauts’ families, media and industry officials from attending the launch. Those involved in the launch were all seen keeping six feet apart and wearing masks.

The warnings about the damage inflicted by the virus already were stark, but Georgieva warned that the world should brace for “the worst economic fallout since the Great Depression.” With the number of cases now surpassing 1.5 million worldwide with nearly 89,000 deaths in 192 countries and territories, much of the global economy has been shut down to contain the spread of the virus. The International Monetary Fund expects “global growth will turn sharply negative in 2020,” with 170 of the fund’s 180 members experiencing a decline in per capita income, Georgieva said. Just a few months ago, the fund was expecting 160 countries to see rising per capita income, she said in a speech previewing next week’s spring meetings of the IMF and World Bank, which will be held virtually due to the restrictions imposed due to the Covid-19.

As of 12th April latest on corona Virus

Pakistan Chief Justice Gulzar Ahmed has criticized Prime Minister Imran Khan’s government for not tackling the novel corona virus crisis properly and said “nothing is being done on ground.” The top judge on 6th April expressed displeasure over federal government’s measures to curb the corona virus pandemic while hearing an appeal against Islamabad High Court’s verdict regarding the release of under-trial prisoners due to corona virus outbreak in the country. “The government is just calling in meetings whereas no work is being done on the ground,” Chief Justice Ahmed remarked during the proceeding. “Hospitals have been closed when we need them. Up till now, 10 hospitals with 1,000 beds each should have been made operational,” he said. Chief Justice of Pakistan Gulzar Ahmed on 10th April has also taken a suo motu notice of the government’s efforts to curb the spread of corona virus in the country. A five-member bench headed by the chief justice and comprising Justice Umar Ata Bandial, Justice Mazhar Alam Khan Miankhel, Justice Sajjad Ali Shah and Justice Qazi Muhammad Amin Ahmed held the first hearing of the case. The next hearing will be held on April 13.

The federal cabinet has approved to appoint Miss Nausheen Javaid Amjad as the new chairperson of the Federal Board of Revenue; bringing an end to a two-month period of uncertainty that also partially dented tax revenues. Nausheen is the second woman who will lead once the prestigious organization of 25,000 people. She is the fourth chairperson of the FBR in the past 20 months, which indicates a lack of consistencies in taxation policies and strategies, as every new chairperson tried to run the FBR in his and her own way. 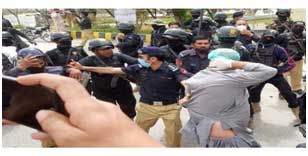 Police wielding batons used force to break up a protest by the Young Doctors Association (YDA) against a lack of protective gear against corona virus, arresting around 100 medics, after they refused to stop their march towards the Chief Minister House in the provincial capital. The protesters say that the government has failed to deliver promised supplies. Hundreds of doctors and paramedics, some in face masks and scrubs, chanted slogan in favor of their demands, when police tried to stop their march. Police use batons to disperse the protesters, causing injuries to some marchers. They also arrested 100 protesters, including YDA office-bearers Dr Hanif Luni, Yasir Achakzai, paramedic Jamal Shah Kakar and others. The YDA said a number of doctors and paramedics had been injured in the baton charge.

A senior doctor and leading dermatologist Dr Abdul Qadir Soomro died from coronavirus in Karachi on Monday, raising safety concerns among health professionals who have been fighting the pandemic on the frontline. Dr Soomro breathed his last at a local hospital, becoming the third doctor in the country to succumb to the virus.

The opposition parties, however, expressed their dissatisfaction with the action taken by the Punjab government, saying the minster and the officials were being made scapegoats to protect the “actual culprits”.

One is aware of the PTI leadership’s allergy to the idea of consulting the PML-N and PPP leaders, but they are no worse, if not better, than many of their former colleagues who constitute the core of the PTI parliamentary party. What is being suggested is the formation of all-parties committees at every level to streamline the fight against the pandemic. Such a move will also strengthen democracy.

The two tied the knot on 4 April, 2020 in a private ceremony that took place in Lahore.”No one else was there,” informed Ahmed speaking to Images. “It was just my family, and Manzar’s family.”

Syed Mehdi Shah, the managing director of Sind Industrial Trading Estate (SITE), had been hospitalized after he became ill after returning from Iraq. He was placed on a ventilator after his condition worsened. The grade-19 officer, who was in his mid-50s, was diagnosed with Covid-19 on March 10.

Pakistan’s economic growth may slip to nearly 1% — the situation that the country went through at the time of the last severe global financial crisis – because of the adverse effects of the novel corona virus outbreak on the manufacturing and services sectors, the World Bank said on Friday. The global lender also said the country’s budget deficit would further widen by 2% of its GDP. This means that the budget deficit gap between income and expenditure will be close to 10% of GDP as against the pre-corona virus estimates of 7.6%.