As of 17th May latest on corona Virus

The friendly fire incident involving the Konarak vessel occurred on Sunday afternoon near Bandar-e Jask, off the southern coast of the Islamic republic, it said on its website.

The curfew will apply from May 23-May 27 following the end of the fasting month of Ramadan.

At least 11 were killed in a 13th May morning attack on a Kabul hospital, including mothers, nurses and two newborn babies, Afghanistan’s interior ministry said 13th May. Shortly after, a suicide bomber targeted a funeral ceremony in Nangarhar, leaving at least 24 dead and 68 injured. Later another explosion came two days after when a truck blew at Gardez killing at least 5 people.

Brent crude prices fell 65pc in the first quarter, before Opec+ producers agreed to cut oil supply by a record 9.7 million barrel per day starting from May to help shore up prices and curb oversupply.

Global automakers have begun to gradually resume operations factories after curbs on public movement prevented workers in many countries from commuting. But they face weak demand as job losses and concern about an economic downturn weigh on consumer spending.

As of 17th May latest on corona Virus

For decades, oil-rich Arab countries in the Gulf have relied heavily on millions of migrant laborers to build their vast economies. Workers flock to these countries in search of comparatively higher salaries and work opportunities. In 2017 alone, migrants in Arab states sent home $124 billion, with the UAE and Saudi Arabia ranking second and third globally in terms of remittance outflow, according to the International Labor Organization. As of Friday afternoon, the UAE had 16,793 confirmed cases of the virus and 174 deaths from the pandemic. Nearby Saudi Arabia have over 35,000 cases and 229 deaths. Kuwait has reported over 7,000 cases and 47 deaths while Qatar has 20,201 cases and 12 deaths. As the corona virus spread across the region, overcrowded labor camps and other densely populated neighborhoods have emerged as areas with elevated risk of the virus. Many workers are confined to small rooms which they typically share with up to 12 other people, according to Amnesty International. They also use communal bathrooms and kitchens which sometimes lack electricity and running water.

According to reports, the artist – who had been dealing with a prolonged illness – suffered a stroke.

Several markets in Karachi and Rawalpindi were sealed on 13th May for not following the standard operating procedures (SOPs) issued by the government to curb Covid-19 infections after easing the corona virus-induced lockdown and allowing business to reopen. Police sealed the entry and exits points of Zainab Market, Victoria Market, Madina City and International Market in Saddar, Gul Plaza and Al Haram Centre in Garden and Jillani Centre in Arambagh. Three stores were also sealed in the city’s East district.  Markets were sealed in other cities as well for not following the SOPs. In Rawalpindi, the district administration sealed 11 shopping centers in the last 24 hours

The Pakistan Meteorological Department on 15th May announced that Karachi will experience another heat wave from May 17 to 22.

In a notification, the department apprised the Karachi mayor, governor, secretary aviation division and the media about the development. Chief Meteorologist Sardar Sarfaraz said that daytime temperatures in the city can rise up to 40 to 42 degrees Celsius.

So far, the government has been recommending that people wear masks when visiting public places. However, we have now decided to make it mandatory as lockdowns have been eased. We will issue a notification in this regard,” he said in a televised press briefing alongside Prime Minister Imran Khan. 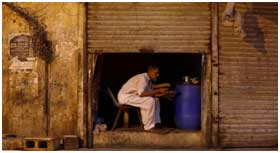 The expectation of the deficit we had prior to the corona virus was 7.6pc. Now, after corona, we think the deficit will touch 8pc plus and that it might be 9pc, said Sheikh.

The bank has cut rates by a total of 525 basis points since the beginning of the health crisis two months ago and has announced a package of measures to support poorer workers hit by the pandemic as well as offering risk sharing with private banks on concessional lending to boost liquidity.

Whether Pakistan can move towards its Recovery