As of 20th June latest on corona Virus

Researchers led by a team from the University of Oxford administered the widely-available drug to more than 2,000 severely ill Covid-19 patients. Among those who could only breathe with the help of a ventilator, dexamethasone reduced deaths by one-third, and by one-fifth in other patients receiving oxygen only, according to preliminary results. Normally used to treat a range of allergic reactions as well as rheumatoid arthritis and asthma, dexamethasone is an anti-inflammatory drug.

Beijing is reintroducing strict lockdown measures and rolling out mass testing after a fresh cluster of novel corona virus cases emerged from the city’s largest wholesale food market, sparking fears of a resurgence of the deadly outbreak. The Chinese capital reported 36 new Covid-19 cases on Monday, bringing the total number to 79 since a locally transmitted infection was reported on June 12 for the first time in nearly two months, according to the National Health Commission.

· NASA spacecraft sends back images of stars from 4.3 billion miles away

This new image of Pluto is stunning planetary scientists. It shows the small world’s atmosphere, backlit by the sun. NASA says the image reveals layers of haze that are several times higher than predicted. The photo was taken by the New Horizons spacecraft seven hours after its closest approach to Pluto on July 14. New Horizons was about 1.25 million miles from Pluto at the time.

At least 19 people died and 172 were injured when a gas tanker exploded on a Chinese highway 13th June afternoon, according to state-run news agency Xinhua. The tanker transporting liquefied natural gas exploded on a highway exit ramp in Wenling, a coastal city in Zhejiang province, according to Xinhua.

The photo of Patrick Hutchinson — a Black Lives Matter supporter who carried an opposing demonstrator away from danger — has gone viral.

Anti-government protesters took to the streets in multiple Lebanese urban centers on 11th June, setting up burning barricades and forcing road closures as the country’s currency fell rapidly.  Demonstrators hurled stones at military forces and some protesters attempted to scale a security fence outside the prime minister’s office in the capital city Beirut. Protesters chanted against the country’s political elite, which many hold responsible for the country’s economic woes. Lebanon’s main coastal highway was closed by burning tires in the north and south of the capital, as protests were staged in areas that rarely see demonstrations, such as Hezbollah strongholds in the capital

At least 20 Indian soldiers have been killed in a “violent faceoff” with Chinese forces on the disputed Himalayan border; the Indian army said late 16th June, the deadliest clash between the nuclear-armed neighbors in decades. India had earlier said three of its troops were killed, but in a statement issued later in the day the army added that 17 more “who were critically injured (on Monday) in the line of duty at the standoff location and exposed to sub-zero temperatures in the high altitude terrain have succumbed to their injuries, taking the total that were killed in action to 20”.

The protester was stopped and detained, according to a journalist on the scene, after he ran towards Johnson’s Jaguar as it was leaving under police escort from the Houses of Parliament.

In one pre-dawn raid, militants killed 12 Afghan security force members when they stormed a checkpoint in Jawezjan province, Maroof Azar, spokesman to the governor, said.

India, Mexico, Norway and Ireland were chosen as non-permanent members, while Djibouti and Kenya — both of which failed to receive the two-thirds vote majority required to win — will go to a second round of voting on 18th June.

As of 21st June latest on corona Virus

Pakistan sighted an annular solar eclipse, popularly known as the ‘ring of fire’ on Sunday 21st June. According to the Met Office, apart from southern parts of Pakistan, the solar eclipse was also be visible in parts of Africa including the Central African Republic, Congo and Ethiopia and in northern parts of India and China.

Prominent religious scholar and Jamia Binoria International chancellor Mufti Muhammad Naeem passed away on 20th June due to cardiac arrest in Karachi, his close aide confirmed. He was 62. The prominent cleric was being taken to the hospital when he succumbed to his heart ailment, Maulana Ghulam Rasool, administrator of Jamia Binoria, said.

She was known as the First Lady of Pakistan’s silver screen, earning a Pride of Performance in 1986 for her work

The first one took place in the morning when a quake of 5.7 magnitudes was recorded in several areas of KP, including the provincial capital Peshawar, APP reported. Mansehra, Swat, Upper and Lower Dir, Shangla, Swabi, Malakand, Nowshera, Charsadda, Kohat, Dera Ismail Khan and Bannu were also among the areas where tremors were felt in the morning. No loss of life or property was reported.

Aziz was born in Jalandhar on April 28, 1936. After partition, his family migrated to Pakistan and settled in Sahiwal, where he received his primary education. He started his career with Radio Pakistan in the 1960s and later went on to become Pakistan’s first television host. His program Neelam Ghar — later named Tariq Aziz Show — started in 1974 on Pakistan Television and continued for four decades. He was also a poet and an actor and performed in several radio and television program as well as in films. He had a one son Ziad Tariq who passed away in his childhood.

According to Judge Shahrukh Arjumand, during the trial of three arrested accused it was “proved that Altaf Hussain ordered the killing of Dr Imran Farooq”. The court handed life imprisonment and imposed a fine of Rs2 million on three men — Shamim Khalid, Syed Mohsin Ali and Moazzam Ali — and directed them to pay Rs1m each to the deceased doctor’s family.

“[The reference] is declared to be of no legal effect whatsoever and stands quashed,” read the judgment. The short order directed that the Inland Revenue Commissioner send a notice to the judge’s wife and children within seven days, asking them to give explanations about the nature and source of funding for three properties in their names in the United Kingdom. The commissioner will complete the investigation within 60 days issue an order within 15 days of investigation’s conclusion. The Federal Board of Revenue (FBR) has also been directed to submit a report to the SC registrar within seven days of the commissioner’s order.

In a blast that took place near a meat shop in Ghotki, two Rangers officials and a civilian lost their lives. According to Senior Superintendent of Police Farrukh Lunjar, the blast took place near a Rangers van that was parked in a market. At least three people were injured in the blast. A team of the bomb disposal squad was dispatched from Sukkur but had a road accident near Ghotki, said group officer Qadir Baksh. Three officials have been injured and were shifted to a nearby hospital.  Separately, a man lost his life while Rangers personnel Munawar was injured in a hand grenade attack, Additional Inspector General (AIG) Ghulam Memon Nabi said. The attack took place near a centre of the Ehsaas Emergency Cash Program in Karachi’s Liaquatabad area, police said. 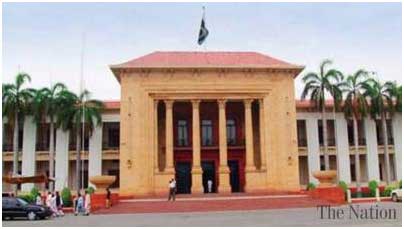 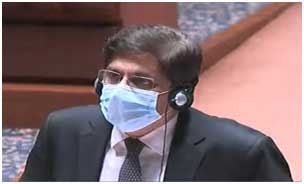 Sind government has red­uced its Annual Develop­ment Plan (ADP) to Rs232.9 billion for FY21, allocating Rs155bn to provincial and Rs15bn to schemes. In exceptional cases such as health, allocation has been increased from Rs13.5bn to Rs23.5bn in order to meet the challenges arising from Covid-19. The government allocated Rs14.8bn for the agri sector. Another Rs30.48bn has been allotted to the health department while Rs5bn for Covid-19 response. Government has allocated Rs14.74bn for irrigation in FY21. For 2020-21, the budget for the education sector, in a macro perspective, has been increased to Rs244.5bn. In his budget speech, CM Shah announced that the salaries of Grade 1-16 government employees would be increased 10%, while those of Grade 17-21 would receive a 5% raise. The upward revision, however, would not be applicable to provincial ministers and Sind cabinet,

The finance minister said the highest allocation of Rs10.2bn had been proposed for communications and works (C&W), followed by Rs2.795bn for local government and rural development (LG&RD), Rs2.578bn for education, Rs2.155bn for physical planning and housing, Rs1.7bn for electricity, Rs1.121bn for foreign-aided projects, Rs1bn for health, Rs528 million for industries/minerals, Rs440m for forests, wildlife and fisheries, Rs382m for agriculture and livestock, Rs268m for research and development, Rs235m for information technology.

Gilgit-Baltistan has decided to increase the salaries of government employees from grade one to sixteen by 15% whereas grades 17 and above will receive a salary increment of 10%.A total of Rs25 billion have also been set aside for development projects.