· What you need to know Corona virus news at a glance

Mologic, Health technology firm, which created one of the first at-home pregnancy tests, is aiming for the test to be rolled out by as early as June if the trials are successful. Antibody tests are designed to establish whether people have previously been infected, as opposed to antigen tests which show if someone actually has the COVID-19 disease caused by the virus. Mologic said assessment and validation of its COVID-19 diagnostic test had begun this week at the Liverpool School of Tropical Medicine and St George’s hospital, and that global partners would also examine the prototypes.

Some e-commerce giants have even halted deliveries partly due to the harassment of staff, while Prime Minister Narendra Modi said abuse of hospital workers had become a “huge issue”. Reports of attacks and abuse have come from across India, increasing with the imposition this week of a 21-day nationwide lockdown. In at least one case, police were accused of beating a delivery driver carrying medicines.

·The 2020 Tokyo Oly­mpics were postponed until 2021 on 24th March, ending weeks of speculation the games could not go ahead as scheduled because of the corona virus pandemic.

The International Olym­pic Committee (IOC) made the decision after speaking to Japanese Prime Minister Shinzo Abe and local organizers. The IOC said the games would be held not later than summer of 2021 but they would still be called the 2020 Tokyo Olympics.

·US State Secretary Mike Pompeo on 23rd March announced a $1 billion cut in US aid to Afghanistan after he failed to convince Afghan President Ashraf Ghani and his political foe to end a feud that has helped jeopardize a US-led peace effort.

The United States also is prepared to cut 2021 assistance by the same amount and is conducting “a review of all of our program and projects to identify additional reductions, and reconsider our pledges to future donor conferences for Afghanistan,” Pompeo said in a statement.

· A Phoenix-area man is dead and his wife is in critical care after the pair took chloroquine phosphate in an apparent attempt to self-medicate for the novel corona virus. Three people in Nigeria have also overdosed on chloroquine, in the wake of President Trump’s comments about using it to treat corona virus.

Trump has called chloroquine, and the closely-related hydroxychloroquine, potential game changers in the fight against Covid-19. The drugs, which are used to treat malaria, lupus and rheumatoid arthritis, are not approved by the Food and Drug Administration to treat the corona virus, and experts emphasize that the medication should not be ingested to prevent or treat the disease. The World Health Organization yesterday warned against using “untested drugs” to treat patients. Here’s what you need to know.

The satellite images from March 1 and March 8, put out by Maxar Technologies, appear to show an increase in activity inside the Behesht-e Masoumeh cemetery in Qom. The images show what looks like two fresh trenches of graves on March 1, with more excavation after that.

The Islamic State militant group claimed responsibility for the attack in a statement, saying it was revenge for India’s treatment of Muslims in occupied Kashmir and threatening further attacks. Sikhs have been targeted by militants in South Asia before. Their community in Afghanistan numbers fewer than 300 families.

The Presidents are Brazilian President Jair Bolsonaro, Mexican President Andres Manuel Lopez Obrador and Nicaragua’ President Ortega. They are ignoring corona virus spread instead of certain cases in people and even in their close associates.

Before you read or forward a message, first identify where it came from. Often viral messages are labeled ‘forwarded’ on WhatsApp or copy-pasted across social media platforms. When everyone you know is sharing updates on corona virus, the rule is to limit your trusted sources of information. From screenshots of TV tickers to create panic, to the use of distorted videos to falsely showing patients collapsing in China, manipulation of graphics is a common method of disseminating misinformation. Everyone is confused right now. The solution is in addressing the confusion. Misinformation thrives when there is an absence of verified facts and it is human nature to try to make sense of new information based on what we already know.

“Dr Usama Shaheed has set an ever-lasting example of bravery and courage and he is the pride of not just his community and country but also of entire humanity,” said the AJK premier at a meeting held to review the overall situation.

Like in other matters, Ulemas in Pakistan are divided over suspension of congregational prayers to contain corona virus outbreak However Sind and Baluchistan governments had banned Friday prayers across their provinces at mosques with immediate effect. Mosques will remain open but only five people could perform the prayers, including the prayer leader and four others. It further said that people would perform all prayers at their homes.

The package contains (1) Rs200bn allocated for labor force (2) Rs150bn earmarked to support vulnerable families (3) Stipend for poor families increased from Rs2, 000 to Rs3, 000 per month. (4) Prices of petroleum products reduced by Rs15 per liter across the board

Murad Ali Shah received Rs 1 million donations with a note that came with donation which revealed the donor to be “a retired person of 88 years without naming who he is. 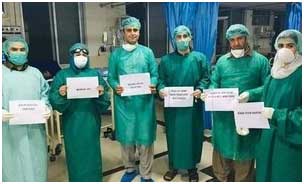 At the forefront are our healthcare workers who are overworked, exhausted, and constrained by a system that lacks capacity. And yet our nurses, doctors, attendants, sanitary workers, and ambulance drivers have been thrust into a crisis of unprecedented proportions. Many — if not most — are working without adequate personal protective equipment and run the risk of getting infected themselves.

Of the injured persons, the condition of six was said to be critical as they suffered over 60 per cent burns. Syed Zahid Abbas (65), who died of serious burns at a hospital, was father of a traffic warden, Yasir Ali. As per his family, he was going to a bank to collect his pension when the blast occurred. According to police and witnesses, the LPG tanker overturned at Shahdara Morr near a petrol pump, resulting in a massive gas leakage from its tank.

SBP announced the second cut in a week saying: “Monetary Policy Committee (MPC) has decided to cut the policy rate by a further 150 basis points to 11 percent.

According to the premier’s special adviser:

The market talks suggested the central has intervened, meaning it supplied the dollars in the inter-bank market to fulfill demand. The rupee had lost to a new record low at Rs168.50 to the US dollar in the first session on 27th March compared to 26th March close at Rs166.13. Later on, the local currency managed to recover and hovered around Rs165-166, according to market sources.

Investor sentiment strengthened after the International Monetary Fund (IMF) and the World Bank called for suspending debt payments by the poorest nations. Additionally, the measures taken by the central bank to facilitate virus-hit local markets lent further support. There was talk in the market that the State Bank of Pakistan would announce further measures on Thursday, which kept the index in the positive zone. Earlier, the PSX’s benchmark KSE-100 index had dropped 28% or 10,500 points in the past three weeks amid concerns over the corona virus pandemic. Trading began on Thursday with a dip, however, the index began climbing shortly afterwards and crossed the 28,000-point mark by midday. Later, the trend reversed, which wiped off most of the gains, resulting in flat close of the market. At close, the benchmark KSE-100 index recorded an increase of 38.40 points, or 0.14%, to settle at 27,267.20.

Political Scenario and SBP with no practical outlook