As of 31st May latest on corona Virus

Driven by Prime Minister Narendra Modi’s vainglorious jingoism at home and his quest for hegemony in the region, India appears to be triggering another standoff with China – this time in the Ladakh region. According to reports by Indian media sources, the flare-up even led to a scuffle between troops from both sides that resulted in multiple Indian security personnel being detained by Chinese forces. “The situation became very volatile last 27th May when a scuffle between Indian personnel and the Chinese resulted in detention of some of our jawans but later they were released,” NDTV quoted a senior Indian bureaucrat as saying.

Some countries, including Turkey, Iraq and Jordan, have imposed round-the-clock holiday curfews. But even where many restrictions have been lifted, celebrations will be subdued because of fears of the pandemic and its economic fallout. Saudi Arabia, home to the holy cities of Makkah and Madina, is under a complete lockdown, with residents only permitted to leave their homes to purchase food and medicine.

The world is still in the middle of the first wave of the corona virus outbreak, WHO emergencies head Dr Mike Ryan told an online briefing, noting that while cases are declining in many countries they are still increasing in Central and South America, South Asia and Africa. Ryan said epidemics often come in waves, which means that the novel corona virus could come back later this year in places where the first wave has subsided.

Trump has led the push for hydroxychloroquine as a potential shield or treatment for the virus, which has infected nearly 5.5 million people and killed 345,000 around the world, saying he took a course of the drug as a preventative measure. Brazilian President Jair Bolsonaro has also heavily promoted hydroxychloroquine while the virus has exploded across nation, which this week became the second most infected in the world after the United States. But the World Health Organization said on Monday it was halting testing of the drug for Covid-19 after studies questioned its safety, including one published Friday that found it actually increased the risk of death.

Under a deal the US signed with the Taliban in February, the Pentagon was to bring troop levels down from about 12,000 to 8,600 by mid-July, before withdrawing all forces by May 2021. But a senior US defense official said the troop number was already at approximately 8,500, as commanders accelerate the withdrawal over fears of the corona virus.

Islamic State (IS) said the corona virus pandemic was divine punishment for its enemies, according to an audio broadcast on Thursday, where the militants also vowed more attacks. The person on the tape identified himself as IS spokesperson Abu Hamzah al Quraishi. “God, by his will, sent a punishment to tyrants of this time and their followers … which can’t be seen by the naked eye,” he said, in an allusion to the Covid-19 disease. “Today we are pleased for this punishment of God for you.” 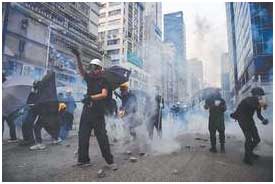 Armed criminals on motorcycles killed dozens of people in a string of attacks on villages in the restive northwest of Nigeria, medics and residents said. Dozens of gunmen⁠ — described locally as “bandits” ⁠—raided five villages close to the border with Niger in Sokoto state late Wednesday, sources told AFP news agency.

·A Minneapolis policeman accused of killing unarmed African-American George Floyd by kneeling on his neck was taken into custody on 29th May and charged with third-degree murder, officials said.

Derek Chauvin is one of four officers who were fired shortly after an explosive video emerged showing a handcuffed Floyd lying on the street as an officer identified as Chauvin pinned his knee to Floyd’s neck for at least five minutes on 25th May. The death of the 46-year-old Floyd has sparked days of sometimes violent demonstrations in Minneapolis and other US cities over police brutality against African-Americans. So far, hundreds of shops have been damaged and a police station set on fire.

As of 24th May latest on corona Virus

Khan was an officer of the Information Group and was currently posted as director of Pakistan Housing Authority (PHA) in Islamabad. He was visiting his family village for Eidul Fitr holidays.

Initial reports suggest the jet crashed after an apparent engine failure. Aviation authorities said on 26th May they have shared their initial findings with the visiting 11-member team from the European plane maker. The Airbus experts and engineers also visited the crash site of flight PK-8303, where they were given a briefing by officials of the Aircraft Accident Investigation Board,

Instead the couple, who had been married for 54 years, were among the 97 people killed when an Airbus A320, operated by Pakistan International Airlines, crashed into a Karachi neighborhood — Pakistan’s worst air disaster since 2012.

The 400mg inject able drug — an interleukin-6 inhibitor which goes by the generic name of tocilizumab — will be prescribed to patients who develop lung complications and an abnormal level of IL-6 in the blood. The IL-6 is an endogenous chemical which causes inflammation. The price of each dose of the drug (injection) is Rs 60, 000 and it will be given twice to patients under treatment at an Intensive Care Unit (ICU) in a life-threatening condition,” a senior official told.

According to tweets by the Inter-Services Public Relations (ISPR), the Indian quad copters were shot down in Rakhchikri sector along the LoC. The quad copters had intruded on Pakistan’s side of the LoC.

Police have registered a case against business tycoon Malik Riaz’s two daughters, his niece and 15 other persons after a model and actress, Uzma Khan, accused them of forcibly barging into her house and attacking her over an alleged extramarital affair. Malik Riaz, while rejecting all the allegations in a tweet, said, “I categorically rebut this malicious propaganda associating me with a viral video. Usman is not my nephew. I’m appalled at such below the belt attempt to malign me for something I’m not involved in any capacity. I would also like to inform that I’ll be filing defamation cases against anyone who tries to implicate me wrongfully for such disgraceful incidents. A judicial magistrate in Lahore on 29th May issued arrest warrants for three women who angrily stormed a house in the city’s DHA neighborhoods where actor Uzma Khan was staying and allegedly tortured Uzma and her sister.

The budget will be presented in the parliament on June 12. According to sources in the Ministry of Finance, Rs1,000 billion is also expected to be allocated for dealing with corona virus pandemic and for providing relief to the business community. In the budget, salaries and pensions of government employees are likely to be hiked by 20 percent. In addition, two ad hoc reliefs are expected to be integrated in the salaries.

Review of the conventional and existing operational business practices of the Islamic banks in...