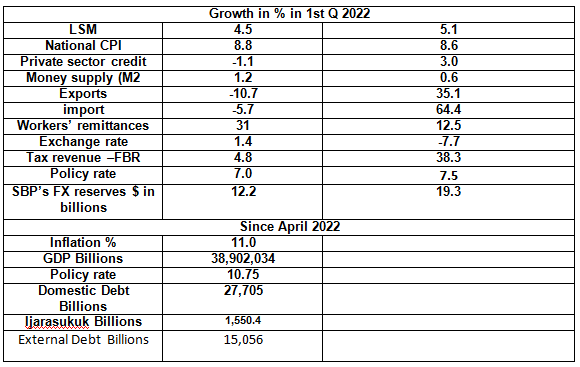 Pakistan’s inflation rate is still under pressure like other countries due to rise in international commodity prices as wells as economic agents’ expectations.

The  government is making all efforts to improve the functioning of markets particularly in the
food markets.

CPI index in December showed a monthly decline of 0.02 percent. Further, in January 2022, the Sensitive Price index shows a marginal decline, as a result of Government efforts to dampen the pass-through of high international prices to domestic retail markets. But even if this would be reflected in the overall CPI index, YoY inflation since January 2022 may slightly increase while a decline is expected on MoM basis.

Agriculture- The inputs availability will remain satisfactory for Rabi 2021-22 crops. The
mechanization and credit disbursement to agriculture show an increasing trend in
FY2022, thus it is expected that in the absence of any adverse climate shock, the
agriculture sector will perform better.

Industrial-activity-Industrial activity, measured by the LSM index is the sector which is most exposed toexternal conditions. Its exposure to developments in international markets is illustratedthe cyclical component of LSM with the weighted average
Composite Leading Indicators in Pakistan’s main export markets (CLI). The CLI of some
individual countries are constructed by the OECD to reflect the deviation of current GDPfrom its potential level. The cyclical component of Pakistan’s LSM output is obtained by extracting the stochastic trend from the seasonally adjusted LSM series. LSM index is published with a time lag of two months, whereas CLI is published with a one-month lag.
The LSM cycle is following the cyclical movements in the main trading partners, but since it is focused on the main industrial sectors and not on total GDP, it is somewhat more volatile than the cyclical component of GDP in Pakistan’s main export markets.

Recently, Pakistan’s main export markets experience stable cyclical positions. The same can be said about the recent cyclical movements of large-scale manufacturing industries in Pakistan. Both these foreign and domestic cyclical indicators currently remain slightly above the 100 benchmarks, indicating positive to neutral output gaps. These cyclical stances however, do not keep these economies from showing positive and healthy growth in their potential outputs.The LSM for November 2021 remained better than expected. In December 2021, theexpectation is that LSM will show strong growth as compared to its level attained in November.

Overall economic activity-The Monthly Economic Indicator (MEI) is based on combining monthly data of indicatorsthat are proven to be correlated with GDP at constant prices. Fig-9 presents the MEI onmonthly basis since January 2019. It should be noted that some of the data underlyingthe December MEI is still provisional and may be revised next month.
The MEI remains strong, based on observed favorable movements in macroeconomic high frequency indicators such as growth in LSM (which is known to exert strong multiplier effects in services sectors), recovery in Pakistan’s main trading partners, strong growth in imports. The momentum in the economic dynamism observed in recent months is expected to have continued to support economic activity in December. The average MEI for the first 6 months of the current FY indicates that average economic growth during this period may remain around 5 percent..

External-According to BOP data, exports and imports of goods and services increased in December2021. Both exports and imports were supported by strong positive seasonal effects thatusually affect these transactions in the month of December. Although the seasonal effects are stronger on imports, the increase in exports was somewhat more robust than the rise in imports, which explains the, albeit modest, decline in the trade balance of goods and services. Usually in the months of January these seasonal effects typically disappear, which may soften the export proceeds, but also to a more important moderation in import payments. It is therefore expected that the trade deficit will settle at lower levels in January and in the following months.

Although the trade balance improved somewhat, the current account balance slightly deteriorated. This was mainly due to an unusual increase in primary income payments to non-residents. It is expected that in January these payments would return to normal levels. Together with the expected improvement in the trade balance due to prudent government measures, the current account deficit may decline in January and onward.

Fiscal- During the first five months of the current fiscal year, the government has increased its
expenditures under grants and subsidies. In particular, under grants, government spending is focused on social protection (BISP & poverty alleviation) and COVID 19 (vaccine procurement). While subsidies to the power sector have also witnessed a sharp rise during the period under review. Thus, an increase in both grants and subsidies has been attributed to a significant rise in current expenditures. With the start of the 5th COVID wave driven by the Omicron variant, the expenditure side may come under further pressure. However, the government will continue to follow a prudent expenditure
management strategy while giving importance to the priority sectors so that the growth momentum may not be disrupted.

Way ForwardPakistan’s economy continues to show healthy value-added creation. Its cyclical positionis largely balanced and the trend growth rate of potential output remains strong. Although this path is expected to continue, also a number of risk factors remain present at the horizon.

A first risk factor concerns the surge of the omicron variant of the COVID-19 disease. Experience in other countries shows that this variant is far more infectious than previous variants. On the other hand, its capacity to cause severe illness also looks to be impaired significantly. It is hoped that the SARS-CoV-2 virus that caused the COVID-19 pandemicmay gradually converge to other known milder respiratory diseases that can be managed without causing too much damage to peoples’ personal health and to their economic welfare.

A second risk remains the stress on the external balance. Although current account deficit remained high, the baseline scenario remains that the excess of imports over exports will gradually ease in the coming months. This expected tendency is enforced by government measures designed to stimulate exports and moderate import demand. The monetary policy decisions are also supportive in this respect. Thirdly, inflation is high and YoY inflation is expected to remain in double digits in the
coming month. In this regard it should be noted that YoY increase in the CPI index is to a large extent a backward-looking indicator. It is not only determined by current price movements, but also by what happened 12 months ago, when international commodity prices were at the lower areas of their current price cycles, whereas now they are at the upper levels of these cycles. Forward looking, what matters most is monitoring future MoM price movements. Containing these price dynamics is the most relevant issue because they will determine further developments in the consumer’s cost of living. Government measures, accompanied by the support of monetary policy, are directed to
protect consumer’s purchasing power in the future. If these future MoM price movements can be stabilized, the YoY inflation will automatically fall back to levels that are suited for supporting Pakistan’s economic development. In that sense the current surge of the YoY
inflation rate is a temporary phenomenon.