To be conversant with the principles of Islamic law (Shariah) — or at least an orthodox interpretation of the law—and guided by Islamic economics, the contemporary movement of Islamic banking and finance prohibits a variety of activities that are allowed in secular states:

“Those who devour usury shall not rise again except as he rises, whom Satan of the touch prostrates; that is because they say, ‘Trafficking (trade) is like usury.’ God has permitted trafficking, and forbidden usury. Whosoever receives an admonition from his Lord and gives over, he shall have his past gains, and his affair is committed to God; but whosoever reverts — those are the inhabitants of the Fire, therein dwelling forever.
God blots out usury, but freewill offerings He augments with interest. God loves not any guilty ingrate.Those who believe and do deeds of righteousness, and perform the prayer, and pay the alms – their wage awaits them with their Lord, and no fear shall be on them, neither shall they sorrow. O believers fear you God; and give up the usury that is outstanding, if you are believers.
But if you do not, then take notice that God shall war with you, and His Messenger; yet if you repent, you shall have your principal, unwronging and unwronged.
And if any man should be in difficulties, let him have respite till things are easier; but that you should give freewill offerings is better for you, did you but know. (Quran 2:275-280).

Prohibitions in this regard are-

Modalities of Islamic Banks include-

In general, Islamic banking and finance has been described as having the “same purpose” as conventional banking but operating in accordance with the rules of shariah law (Institute of Islamic Banking and Insurance), or having the same “basic objective” as other private entities, i.e. “maximization of shareholder wealth” (Mohamed Warsame). In a similar vein, Mahmoud El-Gamal states that Islamic finance “is not constructively built from classical jurisprudence”. It follows conventional banking and deviates from it “only insofar as some conventional practices are deemed forbidden under Sharia.

A broader description of its principles is given by the Islamic Research and Training Institute of the Islamic Development bank, According to which the most important feature of Islamic banking is that it promotes risk sharing between the provider of funds (investor) on the one hand and both the financial intermediary (the bank) and the user of funds (the entrepreneur) on the other hand … In conventional banking, all this risk is borne in principle by the entrepreneur.

Some proponents (NizamYaquby) believe Islamic banking has more far reaching purposes than conventional banking, and declare that the “guiding principles” for Islamic finance include: “fairness, justice, equality, transparency, and the pursuit of social harmony”, although others describe these virtues as the natural benefits of following sharia. (TaqiUsmani describes the virtues as guiding principles in one section of his book on Islamic Banking, and benefits in another.).

TaqiUsmani declares that Islamic banking would mean less lending because it paid no interest on loans. This should not be thought of as presenting a problem for borrowers finding funds, because — according to Usmani — it is in part to discourage excessive finance that Islam forbids interest. Usmani preached that an Islamic economy has to be free of the “imbalances” in society — such as concentration of “wealth in the hands of the few”, or monopolies which paralyze or hinder market forces — would follow from obeying “divine injunctions” by banning interest (along with other Islamic efforts). (Later in his book Introduction to Islamic Finance, he argues that Islamic principles should include “the fulfillment of the needs of the society” giving “preference to the products which may help the common people to raise their standard of living”, but that few Islamic banks have followed this path.) 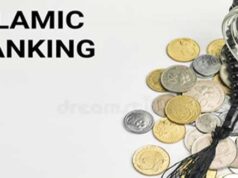