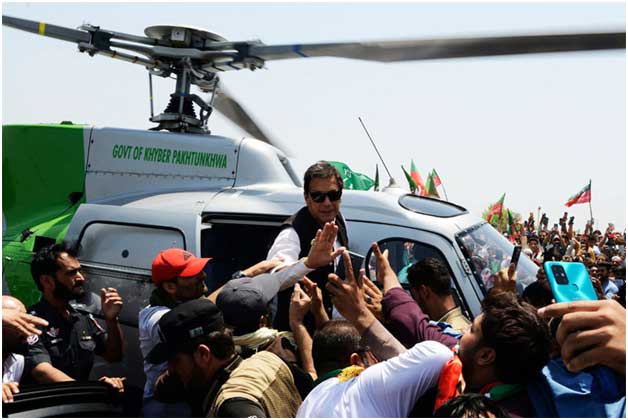 Pakistan Tehreek-e-Insaf (PTI) Chief Imran Khan on Thursday called off his long march, giving the government 6 days ultimatum to dissolve assemblies and announce dates for elections in June. This is the first time he tried to narrate the whole story of his failed 3 and half years tenure.

His rallies on long march were not as impressive as his gatherings were. How much money he spent on his public meetings and long march can be given to poor people. But this is not the motive of Imran Khan. His motive is only to hold prime position in the government. He thinks himself above all and even higher than sky.

Imran Khan also called on the Supreme Court to grant justice over the violence perpetrated by the government on peaceful protesters who were part of his Azadi March.

He gave the government a 6 days ultimatum to announce dates for fresh elections in June and dissolve assemblies or else he will return to the federal capital. Whether after 6 days if not reconciled witethe government as is being in looks what he would do no body Knawsa but now Imran khan era is over.

He further expressed confidence that this time there will be no blockages as there is now a Supreme Court order.

Earlier, soldiers were deployed at the Prime Minister’s Office and the Parliament to avoid any untoward incident in the wake of PTI’s long march and presence of charged workers.

“Pakistan Army has been called in for the security of government’s offices located in the Red Zone,” the notification read.

Imran said that the government used to threaten the public with fake cases, tear gas, baton charge, police brutality but the country had finally liberated itself of fear, he said, adding that a nation that is gripped by fear can be easily enslaved.

“For years we have been taught to live in fear that if the US did not give us money or aid, we would become bankrupt, or that no one can come into power in Pakistan until the US helps you,” he said.

He added that if we do not ask for money from other [countries] this country cannot run its affairs, but we have managed to overcome our fears and wrest back control and have liberated ourselves of our fears, he said.

Imran suggested that their march had united the nation across socio-economic divide, just like in the Independence movement for Pakistan.

“During the course of his journey, he said that he had seen all types of people come out in support including men and women from the villages, the young and the old, the youth, party workers, the elders, the English medium – whom the Urdu medium call ‘burgers’, they used to call your party ‘mummy-daddys’ – the way you have braved tear gas, there is no parable found for this,” he said.

On this journey, in Rawalpindi, tear gas, containers, all attempts were made to stop us and foil our march, but I want to give thanks today that the nation is willing to render any sacrifice to achieve its objectives, he said, while referring to the obstacles created by the government.

With regards to the conspiracy, Imran reiterated that they presented the cipher at the heart of the conspiracy against his government in every available forum including in the parliament. “These Mir Jaffars and Mir Sadiqs were part of this conspiracy.”

He added that first there is a conspiracy and then the conspirators are unmasked, he said.

Imran said that Pakistan faced a double tragedy that first there is a foreign conspiracy to topple their government and then insult to injury those very people were imposed on top who had been looting the country for the past 30 years.

The PTI chief expressed confidence that this nation will not accept the “imported government”, installed through an American conspiracy.

Further, he was sure that the nation will not allow criminals to rule the country as he reiterated his rhetoric that half of the federal cabinet was out on bails in cases while the Prime Minister Shehbaz Sharif and Punjab Chief Minister HamzaShahbaz are facing cases for corruption worth billions.

He hailed the Supreme Court for passing orders to restrain the government from arresting political workers in violation of the law from their homes and of police excesses.

Imran, however, stressed that a great responsibility still lay on the shoulders of the judges of the superior court, noting that in which democracy peaceful protests are not allowed.

“In which country are tear gas used, containers set up, night raids on homes, when people want to peacefully protest,” he said, claiming that thousands of workers remain in jail even though the SC had directed to release them.

Imran further alleged that two of their men have died, one after falling from the Attock Bridge while suffering from the effects of tear gas while the second was pushed off the Ravi Bridge and three in Karachi.

What crime were we committing, he argued, adding that when did he break the law, or direct his party members to create anarchy, he said as he demanded that the apex court give him justice over the violence he and his supporters have faced.

I invite families to participate in our events, in this Azadi March, women and children have participated, he said, as he hailed women for participating in his movement just as they had participated in the Pakistan movement.

Imran said that when they were in power and JamiatUlema-e-Islam (Fazl) MaulanaFazlurRehman, twice came to the federal capital to stage protests, he offered his container for them to protest on. During the speech when he took the name of the JUI-F chief, the crowd started loudly chanting the name “diesel”.

Further when Pakistan People’s Party (PPP) Chief Bilawal Bhutto marched onto the capital, they were facilitated and no attempts were made to stop them.

“These band of looters tried to topple our government or just stage demonstrations for it, did we ever lodge any FIRs or make night raids?” he asked.

The PTI chief also pointed to the night raid at the home of Justice NasiraIqbal, the widow of AllamaIqbal’s son.

“If they can go into her house, then who in this country is safe? He asked, adding whom will the government protect?”

On the police officer who was killed in a night raid, Imran said that if officers enter unannounced in someone’s house at 2am without a warrant, how would they know the difference between the police and dacoits.

“Who will give justice to the family of the poor police officer?,” he said, adding that the government is answerable for the death of the officer.

He added that the new chief of police appointed in the federal capital was about to be convicted but the corrupt government saved him and gave him such an important charge.

This is how countries are destroyed, he said, as he called on the SC to save the Federal Investigation Agency (FIA).

He reiterated that it was their right to protest peacefully if they feel if the country is being mismanaged.

Imran said that he had previously decided to stage a sit in until the new government gives a date for fresh elections but the government wants take the country towards anarchy and create hatred for police amongst the public.

He added that the government wanted the PTI to clash with the police and think worse of them. Moreover, he lamented that the Rangers were used, as if they were terrorists or traitors, and an attempt was made to turn them against the military as well.

The police, the military and the people are all from us, he said.

Imran further claimed that when the rupee loses value in the foreign exchange trades, the government and its leaders living abroad benefit because all of their holdings are in dollars. But His government always presented wrong figures today GDP growth is 3.8 to 4% and inflation at 15%.