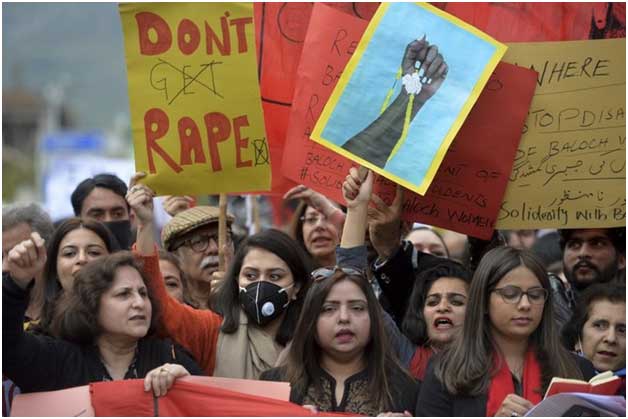 “Why was she out on the Motorway so late without a brother or husband? Why didn’t she check her gas tank before leaving the house? And if she had to travel why didn’t she take the more public GT Road route?” touted Lahore Capital Chief Police Officer (CCPO) Umar Sheikh in response to the gang rape of a woman near the outskirts of Lahore. The case has sparked national outrage and the condemnation of the CCPO’s remarks was swift.

This was the case when a woman was raped by two persons on motorway in front of her children and still the accused have not been caught. One remember case of Mukhtaran Mai who was raped by her villagers and onward when someone asked a question about her case, General Musharraf said that every women of Pakistan want US visa and for that wants to be raped.

At some point or another, most Pakistani women have found themselves on the receiving end of the inherent double standard stemming from such convoluted logic; where our safety is entirely in our own hands but somehow simultaneously in the hands of every man in our family.

This is why rape culture in Pakistan is systemic. It is reinforced at every level; from blaming women for ‘getting themselves raped’ to never really expecting men not to rape women. The idea that men simply cannot be expected to control their baser impulses in the presence of women has been normalized. The premise that ‘getting raped’ is a woman’s fault for driving alone, on the wrong road, at the wrong time, in the wrong place, without a suitable escort etc is just another way of saying that the men who assaulted her couldn’t have helped themselves.

It goes without saying that not all men are the enemies of women. There are scores of wonderful, supportive and nurturing men in Pakistan.

It is the normalization of this violence that ensures that we, as a society, will do anything to avoid blaming rape solely on a rapist. Our culture commodifies female bodies to the extent that romanticizing covering bodies or hiding them away is somehow accepted as an antidote to abuse. Yet, no one is immune to sexual abuse in Pakistan — women in burqas are raped just as those wearing jeans are raped. Infants and toddlers are raped, as are grandmothers. Young men and boys are raped. Tran’s men and women are raped. Animals are raped. Dead bodies are dug out of graves and raped. There is no ‘rape-proof’ clothing, time, place or state of existence in Pakistan and all of this violence stems from a space of power that provides cover to those who perpetuate violence rather than those who suffer from it.

Technically, rape is a crime in Pakistan, one that carries a 25-year prison sentence and in some cases extends to the death penalty. However, ask any woman who has been through the system and she will tell you how poorly it is handled by the authorities, which work more towards punishing rape victims than the criminals, the rapists.

Child Abuse is unfortunately another common occurrence in Pakistan which tries to cover itself under the guise of religion but it is shocking and sad that pedophilia or child abuse is rampant in Pakistani society. The infamous Zainab case in Kasur and the Kasur child abuse scandal are just two infamous incidents which present a very crucial picture of the disease that is plaguing our society and government officials and other important persons fail to address this issue and even if they do, it is too late and the cycle continues.

Child abuse haunts Pakistani society due to many reasons. There are often chances that the perpetrator might be a family member and the lack of communication gap between parents and their children and their blind trust for family members contributes to child abuse occurring in this society.

Here the horrific period of Javed Iqbal, a serial killer from Lahore can be remembered who lured about a 100 young boys and killed them. He committed suicide in his prison cell in 2001.

But even before Javed Iqbal, there might have been several child abuse cases occurring in different parts of the country. Unfortunately due to a weaker and restrictive media set up, the lack of accurate reporting and resources, it is hard to verify how many such cases occurred in the pre-internet days.

The scenario of Pakistan regarding child abuse in 2018 was quite alarming. Compared to 2017, child sexual abuse cases increased from 9 cases per day to 12 cases per day. According to the data 56% victims were girls and 44% were boys.

In spite, media has given some coverage to the horror of such crimes but it is still not enough. In such a conservative society, the lack of sex education, access to pornographic content, drugs and being affected by wrong forms of popular culture can have a negative impact on a person’s thought process due to which he acts in such a manner.

To deal with this horror that has grasped our society, it is important to take measures from a grass root level. Protection services need to be improved and the criminal justice system has to be reformed. Appropriate and proper training should be provided by the Pakistani government to police, doctors, NGO’s and those dealing with this subject in order to provide a protective environment for women and children in Pakistani society. Last but not the least sex education should be mandatory in the Pakistani education system and the taboo regarding it should be erased so our women and children can live in a safer environment.