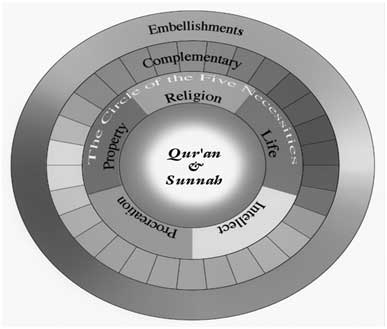 Since the Islamic Financial Institutions must ensure that all their transactions and services must be Shariah compliant, it is vital that it follow the objectives of Shariah also known as Maqasid al-Shariah. The principles advocated by the Shariah ensure that the Islamic Finance transactions are just, transparent and prohibit involvement in illegal activities that are detrimental to society and support society at times of need.

Importance of Maqasid al-Shariah in structuring the framework of Islamic Finance institutions (IFIs) to develop financial products and services have been defined by Abu Hamid al-Ghazali (d.1111 CE) as:

(The very objective of the Shariah is to promote the well-being of the people, which lies in safeguarding their faith (deen), their lives (nafs), their intellect (Ñaql), their posterity (nasl), and their wealth (mal). Whatever ensures the safeguarding of these five serves public interest and is desirable, and whatever hurts them is against public interest and its removal is desirable.)

It is known as the essential interests of life which people essentially depend upon, comprising the five objectives of Shariah: religion (deen); life (nafs), intellect (Ñaql), procreation (nasl) and wealth (mal). These are essentials serving as bases for the establishment of welfare in this world and the hereafter. If they are ignored then coherence and order cannot be established, fasad (chaos and disorder) shall prevail in this world, and there will be obvious loss in the hereafter. Some scholars argued that though the five daruriyat are essential for human welfare, necessities are not confined to these five maqasid; hence, they proposed additional daruriyah such as equality, freedom and protection of the environment.

According to Chapra (1985) the main objectives of the Islamic Financial Institution (IFI) are abolition of interest, adherence to public interest, catalyst for development, promotion of economic well-being, establishment  of  social  and  economic justice, and  equitable distribution  of income.

The Qur’an has laid down several premises for economic justice.  For example, people are not allowed to devour their wealth unjustly except through mutual consent.  All  forms of  elements  that  would  create economic injustices such  as bribery  (al-Rishwa) fraud or deception  (al-Ghish),  gambling (al-Maysir),  dubious contracts (al-Gharar) and riba are condemned in the highest term.  Interest is considered as a major destabilizing factor that contributes to cyclical fluctuations in the economy and it transfers resources from the poor to the rich.

Hassan (2003) observed that  the  Islamic Financial Institute (IFI)  must  seek to realize  economic justice  through  wealth  circulation, elimination  of  absolute  poverty  and  efficiency in  the utilization  of  resources  available.

The profit  and loss sharing arrangements on the pattern of equity are more just  than the conventional contracts  as  closest to  the  Islamic  ethos than  the predetermined fixed  interest  debt  which is unjust  and  a taboo.  IFIs  must  seek  to realize  economic justice that  would result in permanent  contribution  to  economic  efficiency, productivity,  growth  and  stability .  To ensure social justice as enjoined in the Qur’an, Islamic banks must strike effective balance between profitability and social justice.

All excessive  wealth held  beyond  one’s legitimate  needs  should be  held  as a trust  (Amanah)  and  surrendered to  the members of the  society. The Shari’ah has provided several measures for spending wealth on the society. These  include Zakah,  endowment (Waqf),  voluntary  charity (Sadaqat), inheritance  (Faraid),  Will  (Wasiyyah) , donations  and  grants (`ltiyyah),  and  social  security (al- Takaful  al-Ijtima’i).

Banking and finance are important elements in our lives. Unfortunately the world banking and finance system is based primarily on riba which is strictly prohibited in Islam. In order to cater for Muslim needs and also introduce a fairer and just banking system, Islamic finance was introduced. Providing financial products that are shariah –compliant is the biggest challenge for the Islamic Finance Institution. The Financial Institutions have responsibility to fulfill the objectives of the Shariah; the Maqasid al-Shariah and serve the public interest. The financial product must be shariah-compliant not only in structure but also in purpose; the contract must be valid and also permissible. If emphasis is not given into providing products that comply with the Maqasid al-Shariah then it defeats the purpose of having Islamic Financial Institutions in the first place. Islamic Financial products will eventually just be foreign sounding products that are actually a copy of the conventional banking products with shariah-compliant stamp on it.

In current scenario when corona epidemic is on peak with no businesses and unemployment all banking institutions have been asked to relax rule regarding their financing and defer their recovery for one year. Here Islamic Banking can go further in extending Qardae Hassna. Currently Iran is the only country where banks are extending Qardae Hassana and right now it is 7-8% of their total Islamic financing. In Pakistan this ratio is 0.5% i.e. an amount of Rs 835 million against total Islamic financing as Rs 1,632 billion. Islamic banking profit as of Dec 2019 is Rs 66 billion. They can transfer some of this amount to Qardae Hassnah since it is highly needed right now.

Whether March 2020 can be a month of Change

What does Islamic Finance focus on?