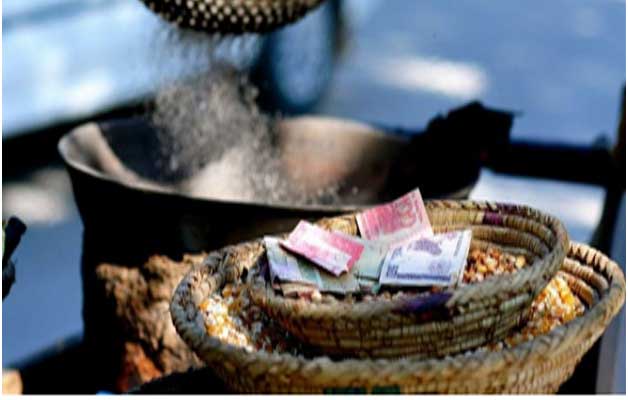 With cold winds blowing in the month of January, a 7-year old child was sitting outside my house playing with something. He was looking unaware of the intensity of the coolness. On asking, what he was doing, the child replied that her mother is working in the next door house and he is waiting for her. Like this incident, one can see a crippled person sitting in front of petrol Pump near Malir Halt, Karachi looking for every passing by car for some help. These are two examples but our country is full of these. By a rough estimate, 50-60 per cent population of Pakistan lives under the poverty line i.e. with $ 1.5-2.0 daily for their livelihood. Minimum wage has set this standard as Rs 17,500 i.e. not for a person but for a family of six on monthly basis.

The dilemma in Pakistan is that instead of looking into ground realities, the bureaucrats sitting in Islamabad are still banking on figures that show declining trend of poverty in the country. The advisors and other notable persons in the previous regime were advocating that trickledown effect of growth would soon dent the poverty factor. But like Chicago Boys of Chile, the PhDs hired during Pinochet regime to rehabilitate Chile’s economy (who tried to rehabilitate Chile’s economy with their dogmatic ideas) the experiment of trickle-down theory has also failed in Pakistan in alleviating its poverty. Finally, the Chicago Boys ran out of the country in Chile and this is what we are witnessing in Pakistan right now.

However, in crisis like these, people of broader vision come up with ideas to break such kind of stalemates. This is what happened in a country one notch above to our population remaining part of Pakistan till 1970 i.e. Bangladesh.

Here, Muhammad Younus, professor of economics, launched a project in 1985 starting with meager amounts to finance lower strata of the society that later transformed in to Gramene Bank of Bangladesh. His basic objective was to make financing available at the doorsteps of downtrodden for changing their lives. The movement gained pace and now in every part of the world it is being replicated. Commenting on his efforts, Muhammad Younus once described it a result of his passion. He frankly said that if he had been a banker, he would have never thought of launching this project. This goes with an old saying that in fact world has always been changed by the people regarded as mad and not by those who were clever enough to remain within the status quo.

This also raises the question that what microfinance does refer to? In fact it is the provision of providing financial services to low-income clients, including consumers and the self-employed. Microcredit may not be confused with the microfinance, which addresses a full range of banking needs for the poor people. In essence microfinance lies very close to Islamic finance that asks for shouldering social responsibilities as well

Islamic microfinance represents combination of two fast growing markets in the world i.e. microfinance and Islamic finance. Though both of these markets have small access to the population in the Muslim block at this point of time, but they have great future ahead of them. However, at this point of time Islamic microfinance is highly concentrated in a few countries with top three as Indonesia, Bangladesh and Afghanistan i.e. 80 per cent of global outreach. Its size is also quite dismal at the moment i.e. $200-300 million as compared to $25 billion on conventional side that is being projected for $250 billion to match current needs. According to microfinance information exchange, the current figure of microfinance worldwide is just $7 billion loaned to 30 million customers through 1,200 microfinance institutions. But this represents only formal sector.

In promotion of Islamic microfinance three countries — Indonesia, Pakistan and Bangladesh — are prominent. In Indonesia, the government through its legislation has provided support to this mode of financing and now in that country 105 new Islamic banks are in operation. In Pakistan, the State Bank of Pakistan (SBP) has allowed creation of new Islamic microfinance banks or to open its branches through Islamic banks, conventional banks or through conventional microfinance banks. In Pakistan, available figure on microfinance including Islamic microfinance is just $286 million. The banking finance against this figure stands at $35.9 billion. SBP has set its target to raise microfinance customers in 2010 to 3 million and in 2015 to 10 million from 1.3 million right now. High cost of financing in this sector is the main impediment. Overall the cost per borrower in Pakistan on microfinance is estimated at Rs2, 262,000 which is the highest in the region. Debt to equity ratio in this sector is 2.6 per cent whereas equity to assets stands at 28.1 per cent. Average loan size is Rs8, 000 to Rs100, 000 and normally person with income of Rs12, 500 qualifies for the loan. According to one survey 91.4 per cent loans are obtained for the expansion of current businesses and not for the new businesses. The procurement of funds for the business is the problematic area.

In Iran, the dominant role of microfinance is done through QardaeHasna which is considered charities and not Islamic microfinance. Through this facility, 3 million families meet their personal expenses. The size of this fund in Iran is around $5.5 billion. Apart from this facility which binds its customers to refund principal only microfinance activities in Iran are informal.

The outreach of Islamic microfinance is still limited. Bangladesh has 100,000 customers as compared to 8 million in its conventional sector. In Indonesia, the figure is less than 100,000. Like conventional microfinance, its customers are mainly females. In the West Bank and Gaza, the numbers are 100 per cent whereas in Bangladesh, Jordan, and Saudi Arabia the numbers are 90 per cent, 80 per cent and 86 per cent respectively of overall customers. In Pakistan this is 40 per cent.

Islamic microfinance (IMF) is getting popular as an alternative to conventional microfinance not only in many Muslim countries but also in non-Muslim communities due to its interest free attribute. This mode of financing presents moral rulings on answerability to God in order to check human moral weakness. Islamic Finance implements market control and discipline by putting limits on “leverage, excessive lending and derivatives”. Moreover, it has several distinguished sub-modes like zakat, sadaqat, waqf, Qarz e Hassan, Murabaha, Zakat, Waqf, SadaqahIstisna, Musharakah, Salam, Mudaraba etc. (ADB 2009, Bano, 2012; IFAD 2013).

Islamic microfinance institutions have observed fourfold increase in their clients since 2006 with estimated clients about 1.3 million in the world. Microfinance mod of financing may be a key to poverty alleviation to 650 million Muslim populations living below 2 dollar a day.

Pakistan is one of the few countries of the world having separate legal and regulatory framework for microfinance banks. Currently, a large number of MFBs, MFIs and RSPs are providing financial services to the neglected segment of society.

In Pakistan, some institutions like Akhuwat, Farz Foundation, Wasil Foundation, Naymat, and Islamic Relief are disbursing Islamic MF products. Akuwat foundation is the largest that has disbursed Qarz e Hassan to 0.355 million households with 175 branches in 116 cities of Pakistan. Loans have been extended to 224,308 male and 131,143 female entrepreneurs of the country with98.84% return rate in a small duration of about ten years. Farz Foundation started its operation with pilot project in 2009 while NAYMAT initiated in 2002 but they started Islamic MF services in 2009. Likewise Islamic Relief Pakistan began their Islamic microfinance services in 2001 along with other Sharia compliant social services to help deprived and destitute but not on such a large scale like Akhuwat Foundation. These organizations are catering their Islamic Microfinacial services in the form of Murabaha to help entrepreneurs’ in the country. Moreover, WASIL Foundation (Murabaha, Ijara, Istisna, Salam etc.) and Asassah have started working a short time earlier to help poor to make them financially self-reliant.

Islamic microfinance is still a niche. For moving forward, it requires a suitable business model providing way outs in reducing its borrowing cost. If one succeeds in expanding its outreach than obviously one can hope its role in alleviation of high poverty in Pakistan. This would be in addition to what we are doing through Benazir Income Support Fund.

Another idea is to establish QardaeHasna Fund mainly financed through Zakat recoveries.   However, to move forward one requires great vision that normally does not exist in bureaucrats and politicians with ad-hoc mindsets.

How to control Fiscal and Current Account Deficits in Pakistan