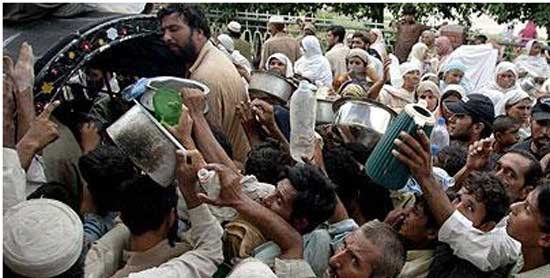 In national issues one has to be optimistic but ground realities cannot be ignored as well.

Two years after PTI government we see lot of crisis emerging and inflating with the passage of time. Sh Rasheed in his recently published autobiography has written that in decision making Imran Khan do what he think whether right of wrong. This approach he got from five day test matches but for running a country compromises and right decisions are required. Today on the agenda of PTI is only Nawaz Saharif and Zardari and nothing more and they have now been declared traitor and agent of India with all their comrades including PM of Azad Kashmir, but people are in fact concerned with other issues.

Let us see in such environment what the critical areas for the country are.

Accountability– It is going on one sided.  In a verdict regarding the bail plea of a Pakistani opposition leader, Rana Sanullah, Justice Chaudhry Mushtaq Ahamad of the Lahore High Court acknowledged that “Political victimization in our country is an open secret”. Then came cases of Justice Shaukat Siddiqui of the Islamabad High Court and Justice Qazi Faez Isa of the Supreme Court who criticized the role of the government and agencies   Most cases against the opposition are prepared by National Accountability Bureau (NAB), the powerful anti-graft agency constituted by General Pervez Musharraf

Many political figures in the country have slammed the NAB for political victimization and there is a general consensus that the opposition is being targeted. Nawaz Sharif has repeatedly said that it is victimization in the guise of accountability. His brother Shehbaz Sharif, who had been now arrested and  more cautious in his word selection earlier, now blasts this recent campaign as emerging from an “unholy alliance“ between the ruling party and the NAB, who seem to be working in tandem.

On the other hand, the NAB’s treatment of those affiliated with the ruling PTI is much different and most of the case files against them are closed. Critical cases against the PTI, including allegations of the party receiving illegal foreign funding and maintaining secret bank accounts, have effectively been pushed under the carpet. A case against Imran Khan himself for the alleged misuse of official helicopters has also been silenced. Proof of undisclosed properties owned by Imran’s sister Aleema Khan surfaced and was accepted by her too, but she was allowed to go free. Similarly, probes against some other major PTI players like Pervez Khattak lie conveniently suspended.

Considering all the hidden painful facts behind the much-touted slogans of unbiased accountability, the political victimization of opposition is evident — as acknowledged by the higher courts also. It can only be hoped that this unjustified campaign does get the attention it deserves from international human rights and justice organizations.

Growth of the country. The GDP growth is mostly said to be on the back of services sector in Pakistan instead of manufacturing one but this year it has also gone negative by -0.6, Only agriculture has shown growth of 2.7% as compared to 4.0% in 2018 . In Pakistan till we do not touch 5% growth we cannot dent poverty. As compared to GDP growth of -0.4% in 2020 it was 5.8% in 2018. For this the government has to create an enabling environment for industrialization and agriculture growth.

Fiscal deficit -Pakistan’s fiscal deficit in FY20 stood at 8.1 percent of the GDP, compared to the deficit of 8.9 percent of GDP in FY19. In terms of Rupees, the country’s total budget deficit in FY20 clocked in at Rs 3.376 trillion, whereas, in FY19 it stood at Rs 3.444 trillion. As of March 2020, public debt of Pakistan is estimated to be about ₨42.8 trillion/US$256 billion which is 84 percent of gross domestic product (GDP) of Pakistan. About ₨18.17 trillion is owed by the government to domestic creditors, and about ₨13.78 trillion is owed by Public Sector Enterprises (PSEs). It payments and debt servicing added by expenditure would add up in to public debt in the coming years.

Energy Crisis-It can be handled by increasing power generation. Industries should be offered incentives to use power from the grid instead of producing their 5,000MW through captive power plants. The actual challenge is the high cost of power. Pakistan produces the most expensive power in the world. “Our cost of power production is 26% higher for the industrial sector compared to other regional countries like Vietnam, Sri Lanka, Malaysia, Bangladesh, South Korea, Thailand and India. It is 28% costlier for residential areas than the regional countries. Pakistan has added 10,000-12,000MW production capacity in recent years and another 10,000 to 12,000MW is in the pipeline. Surplus power production and capacity payment to the standby plants has remained a major cause of producing expensive power. This must be controlled by using wind and solar energy and through small dams in each province instead of generating electricity through oil.

Health- Studies have shown that Pakistan’s private sector healthcare system is outperforming the public sector healthcare system in terms of service quality and patient satisfaction, with 70% of the population being served by the private health sector but they are highly costly. Non-communicable diseases such as cardiovascular problems, diabetes, cancer and coronary heart disease share 20.5% the burden of diseases and 2.5% are disabled. They account for 58% of all deaths in the country. There is little strength in health care delivery system in Pakistan like making health policies, participating in Millennium Development Goal DG program, initiating vertical programs and introducing Public Private Partnership (PPP), improving human resource development and infrastructure by making Basic Health Unit in Pakistan, people have average age around 67 years. Sadly, the country has low life expectancy than other European countries because we do not value our life. Country’s spending on health is still less than 1 percent of its GDP, whereas the World Health Organization (WHO) recommends an allocation of about 6 percent.

Employment- Pakistan’s industrial sector accounts for about 20% of GDP. Cotton textile production and apparel manufacturing are Pakistan’s largest industries, accounting for about 65% of the merchandise exports and almost 40% of the employed labor force. 50 % labor force is employed in agriculture sector About 7 million to 10 million people are unemployed in Pakistan that is a huge number. Being a country where 70% of its population is below 30, government needs to plan human resource development plans.