The idea of this article came in my mind on treatment of retirees by State Bank of Pakistan which holds a good reputation in this regard.

According to SBP in its first quarterly report of FY21saidthat Public sector pension expenditure has risen sharply over the past decade and the unfunded nature of pension payments in the country is making the current structure unsustainable. The overall pension spending as a share of tax revenue has reached 18.7 per cent of tax revenue during the last decade as of FY20, almost double the level a decade earlier.

The SBP report says that this increasing pension burden is mainly because of two factors; increases in life expectancy extending the duration of pension support and lower-than-expected investment returns (owing to very low interest rates, for instance) that could further lead to a funding shortfall.

SBP has proposed that retirement age should be relaxed more than 60 year as of current. It is pertinent to mention here that the retirement age of 60 years is already markedly lower than many other countries, said the report adding that the delayed retirement age will support in increasing the contribution period once the government opts for a funded system in the subsequent round of reforms.

Further this year i.e. July 2020, Pensioners in SBP have not been given increasein spite increase has been given to its regular employees and as agreed already that for each year they would be given increase. Nobody knows that what is in the mind of SBP but everybody know that person or persons sitting in the HR are negatively minded people and even they go as far as can hurt the good reputation of Governor and Dy Governors. It looks that these people have not to retire or to leave this world. Now in SBP the numbers of pensioners are on declinesince new employees don’t have the option of pension but they are entitled for gratuity and fund payments on their retirement.

It is generally conceived in our society that after 60 years (3 % of population in Pakistan) the employees going outside become a liability and they are considered beggars apart from what they have done during their service time before the institutions were handed over to the present creed.

This is how new Managers of SBP are that was considered a credible institution some time back. I don’t know whether Governor would take any action against this mindset or leave it like it is going on in its present shape.

Example of SBP reflects condition of other institutions in Pakistan as well who are far inferior to SBP in this respect. On first week of each month we see long queues in front of NBP. Recently the staffs sitting there have been found paying pensions to fake accounts putting the money in their pockets. Investigation is still going on in this regard. EOBI is another player in this regard with lot of corruption charges on it .One mega scandal is on record with its investments in connivance with Defense Housing Authority

The history of pensions is said to be a history of broken promises, Arthur, (2006). That is why one of the main problems in pension policy is to develop an institutional framework that guarantees that public and private pension promises are kept.

Now State pensions are being transformed into privately-owned pensions since early 1980s, especially in Latin America and Eastern Europe.

Some countries however, introduced some innovative variants in this model depending upon their inherent social and cultural norms, like Mexico entirely privatized its Social Security System, Argentina pursued a mixed public/private pension system, Whereas, Brazil is still struggling with significant pension reforms. Madrid (2004) rightly says, “Never in the history of social security had so much change taken place in such a short period of times. It would be incorrect to consider that the problems relating to state pension are associated with developing countries only. The ability of the state to meet the pension dues is skeptical in the developed world as well. In Italy, pensioners are reluctant to go along with the state pension system, because they believe that the investment of their pension income in the private sector would ensure more yield than in the public sector. The inflow of information system has also empowered the pensioners in developing countries far better than before and they seem to have a better comprehension of the state monetary system.

Pensions in Pakistan are provisions which are provided to retired employees including Military as well Civil. Because only the retired formal sector mostly benefits from pensions, most of the social schemes and retirement welfare system in the country cover a small proportion of the old-age population, whereas a significant proportion of the elderly population working in the informal sector remains largely unprotected by these social security schemes. There have been calls for devising and implementing reform in the pension sector of the country in a way where there is efficient deployment of resources and the eligible, yet economically disadvantaged portion of the retired population is also entitled to receive and be endowed with this social security right.In Pakistan EOB Act 1976 was enforced with effect from April 01, 1976, to achieve the objective of Article 38 (C) of the Constitution, by providing for compulsory social insurance. It extends Old-Age Benefits to insured persons or their survivors

Under EOB Scheme, Pension Rates is Minimum   Rs. 8,500 =Maximum  As per Formula contributions

State owned system of pension needs parametric reforms. While attempting to create a convincing case for privatization of state pension, we should not forget the role of state in honoring its responsibilities concerning pension schemes. The states typically are responsible for designing and implementation of the pension schemes, regulating and supervising the funded tier, and provisioning of the implementing pension guarantee as of last resort.

Pakistan has immense opportunities of initiating pension reforms with the following advantages. Firstly, an efficient and strong capital market and strong institutions including strong legal system are pre-requisite for ensuring privatization pension, it would promise better rate of return to employee.

Finally It is utmost important to have a demarcation line for the privatization of pension scheme. Carmelo Mes-Lago (1996) identifies three major sets of reforms. He is of the view that most of the Latin American Countries like Mexico, Chile and Bolivia etc. had converted from state owned pension system to fully liberalized private pension system and drew all future workers to opt for new system. Peru and Colombia adopted parallel system which meant that state owned system of pension remains effective and competes with newly establishing private pension.

Pakistan needs comprehensive program in this regard and State Bank can take a lead in this respect but for that it has to ask its present officials to wake up from their sleep as on date.

Political and Economic scenario in 2021 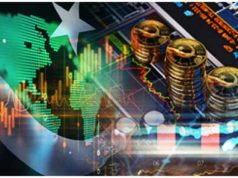 Change of Command and Rule of Law

War against ISIS and Al-Qaida and all kinds of Terrorism