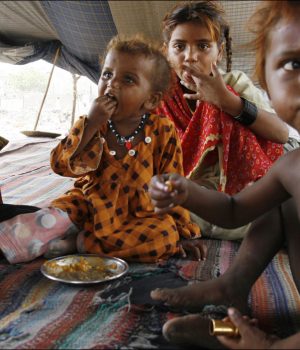 Out of world population of 7.7 billion, 6 billion still live under poverty in 2020.

As per latest poverty estimates, 24% of Pakistan’s population lives below the national poverty line i.e. Rs 300 per day with family of six, whereas 75% of population lives with Rs 1000 or less than that per day . So 15 crore population out of 21 crore lives in highly difficult situation. Analyzing the HDI value from 2000 to 2018, report states that Pakistan’s HDI value was 0.560 in 2018 compared to 0.558 in 2017 that is almost same within last 18 years.

Media and writers mostly stress on creating sensation in their writings. But poverty related subjects as education, health employment are not their main subjects. Media and Writers, divided in to uncountable segments are busy in holding Award distributions, Reception parties in five star hotels. The reasons are best known to them. In fact they want to become part of elites in governments and powerful institutions behind these governments. Every member of these organizations thinks himself Socrates of the 21st century, whereas Socrates was totally illiterate but was committed to transform the society.

Poverty in Pakistan has always remained high in spite of different rulers appearing in its 76 years history. Unfortunately no ruler has completed its term in Pakistan before 2008 where we got an example of Asif Zardari as president. Otherwise all 16 or 17 Prime Ministers staying for shorter terms and 5 Military rulers staying for longer periods have not been able to complete their terms. So with this situation nobody has given any attention to eliminate poverty in Pakistan which has remained the main cause of every crisis in Pakistan.

In case of poverty vulnerability stands in the case of economically deprived people who have fallen into poverty as a result of exogenous random shocks. Vulnerable households are generally found to have low expenditure levels. These Households are considered vulnerable if they do not have the means to smooth out their expenses in response to changes in income. Since coping strategies for vulnerable households depend primarily on their sources of income, exogenous shocks can increase reliance on non-agricultural wages. Such diversification has occurred in many parts of Pakistan, leading to an increased dependence on credit.

While economic vulnerability is a key factor in the rise of poverty in Pakistan, vulnerability also arises from social powerlessness, political disenfranchisement, and ill-functioning of institutions. All these are also important causes of the persistence of vulnerability among the poor.

Other causes of vulnerability in Pakistan are the everyday harassment by corrupt government officials, as well as their underperformance, exclusion and denial of basic rights to many in Pakistan. Also, lack of adequate health care by the state lead the poor to seek private sources, which are expensive, but still preferable to the possibility of medical malpractice and being given expired medicines in state run medical facilities. Also, the failure by the state to provide adequate law and order in many parts of the country is a factor in the rise of vulnerability of the poor.

By the end of the 1990s, the manner in which power is exercised in the management of a country’s social and economic status resources for development emerged as Pakistan’s foremost developmental problem. Corruption and political instabilities such as the insurgency in Baluchistan and decade long armed conflict with the Taliban in Waziristan region resulted in reduction of business confidence, deterioration of economic growth, reduced public expenditure, poor delivery of public services, and undermining of the rule of law. The perceived security threat on the border with India has dominated Pakistan’s culture and has led to the domination of military in politics, excessive spending on defense at the expense of social sectors, and the erosion of law and order, in conjunction with several implementations of martial law and approximately four coup d’états in the past seventy six years.

Pakistan has been run by military dictatorships for large periods of time, alternating with limited democracy. These rapid changes in governments led to rapid policy changes and reversals and the reduction of transparency and accountability in government. The onset of military regimes has contributed to non-transparency in resource allocation. Those who do not constitute the political elite are not allowed to become political leaders. Development priorities are determined not by potential beneficiaries but by the bureaucracy and a political elite which may or may not be in touch with the needs of the citizens. Political instability and macroeconomic imbalances have been reflected in poor creditworthiness ratings, even compared to other countries of similar income levels, with resulting capital flight and lower foreign direct investment inflows. The current government of Pakistan has professed commitments to reforms in this area but during last one and a half year they have miserably failed.

In addition, Pakistan’s major cities and urban centers are home to an estimated 2 million street children. This includes beggars and scavengers who are often very young. The law and order problem worsens their condition as boys and girls are fair game to others who would force them into stealing, scavenging and smuggling to survive. A large proportion consumes readily available solvents to starve off hunger, loneliness and fear. Children are vulnerable to contracting STDs such as HIV/AIDS, as well as other diseases.

Pakistan is home to a large feudal landholding system where landholding families hold thousands of acres and do little work on the agriculture themselves. Since, feudalism is rampant in such areas; people cannot acquire and hold land, which is one of the main sources of livelihood in rural agricultural areas of Pakistan. They enlist the services of their serfs to perform the labor of the land. 51% of poor tenants owe money to the landlords. The landlords’ position of power allows them to exploit the only resource the poor can possibly provide: their own labor.

The floods earthquakes and natural calamities also accentuate differences between the wealthy and poor in Pakistan in different periods. It is not a concealed fact that wealthy feudal warlords and landowners in Pakistan have been diverting funds and resources away from the poor into their own private relief efforts. The floods and earthquakes have accentuated the sharp divisions in Pakistan between the wealthy and the poor whenever they took place. The wealthy, with better access to transportation and other facilities, have suffered far less than the poor of Pakistan.

So with these facts Pakistan needs change from top to bottom with strong democracy to make everyone accountable in case of their responsibilities. For this media including social and electronic can create an environment where people can easily judge actual culprits and to find ways to move forward, though destination is still far away.

Role of G20 group of Countries in fighting against Corona Virus

Military and Government on military appointments

Attack on Media in Pakistan

Afghanistan with its past, present and Future